Sprint's unlimited data plans are some of the best in the industry, if you get the coverage.
Written by: 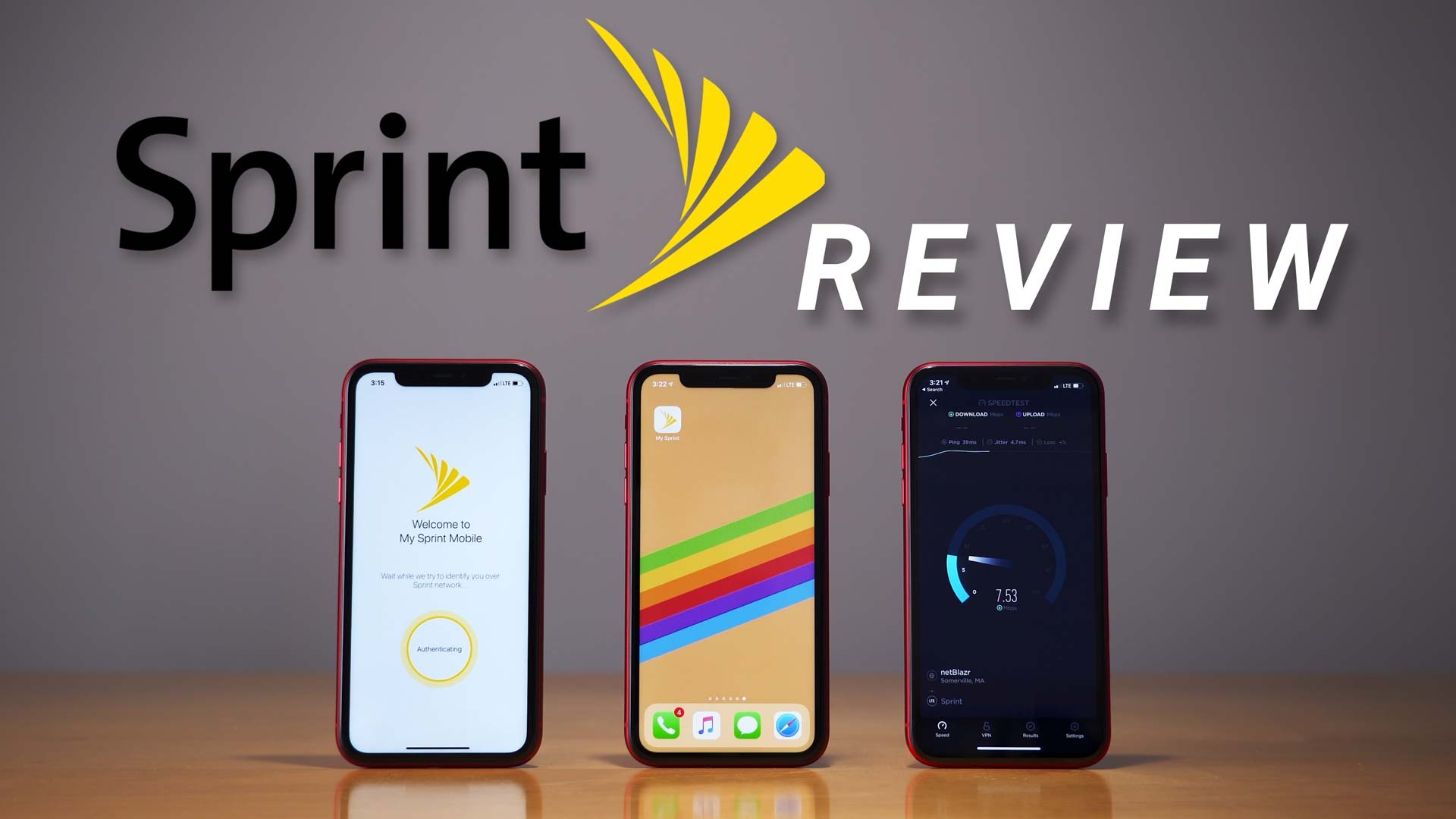 Sprint's unlimited data plans are some of the best in the industry, if you get the coverage.

The top comment on my Best Cell Phone Plans 2019 video is “Sprint is trash. It has 685 upvotes. Another user commented in response to this, “I work for Sprint and don’t use Sprint even though I’d get it for free, that’s how trash it is.”

Even the Executive Chairman of Sprint, Marcelo Claure, while arguing for the Sprint and T-Mobile merger said, “The truth of the matter is we have the worst network quality scores in the industry.”

Naturally, given these persuasive and encouraging words, I decided it was time for me to try out Sprint for myself to help you answer the question, “Is Sprint worth signing up for?”

The short answer is that Sprint is only worth it if you get good Sprint coverage (as is mostly true with any carrier).

The problem with Sprint is their overall weaker coverage

Sprint is appealing because of their affordable plans, the high amount of hotspot data they include, their international coverage, and their family discounts. But the problem with Sprint, as you can tell from the comments, is that they don’t have good coverage. And it’s not worth signing up for a service if you can’t use it, right?

I think Executive Chairman Claure says it best himself, “It was getting really, really hard to sell [service] because new customers went home, tested their phone, and then realized they had coverage gaps.”

RootMetrics is an independent research firm that provides insights into cellular network performance from major carriers around the globe. Their coverage map for Sprint demonstrates its weak coverage across the United States. Compared with Verizon, AT&T, and T-Mobile, Sprint clearly offers the worst network coverage and performance, particularly in rural areas.

Despite the overall weaker coverage, Sprint does tend to provide better coverage in cities. And if you happen to live in an area with good Sprint coverage, their plans are actually very competitive. In fact, I think they are better than what Verizon, AT&T, and T-Mobile have to offer.

What makes Sprint appealing, and honestly why people choose to sign up for them, is their plans and prices. They are reasonably priced. They often have good promotions for great family discounts. And they included added perks such as Hulu, Tidal, and Amazon Prime memberships.

Sprint offers a total of four unlimited data plans to choose from:

Sprint Unlimited Kickstart is the most affordable unlimited data plans available from the major carriers. It’s $35 per month, but you can get it for $25 per month if you sign up at BestBuy.

It’s not the best plan, as data speeds are deprioritized when the network is congested, it doesn’t support the personal hotspot, and there are data streaming limits for certain types of content. Video streams at a max of 480p (standard definition), gaming content streams at 2Mbps, and music streams at 600Kbps.

There are also no financing options available for purchasing a smartphone, and unfortunately there are no family discounts.

However, despite the compromises, $35 per month for unlimited data is a great deal, and is one of the reasons Sprint Kickstart is so popular.

Compared with Verizon, AT&T, and T-Mobile’s entry level unlimited plans, which are $70, $65, and $60 respectively, Sprint’s Unlimited Basic Plan compares really well. It offers 50GB of priority data, compared with deprioritized speeds on Verizon and AT&T, and it includes 500MB of high-speed hotspot data compared with T-Mobile’s hotspot data which is capped at 3G speeds.

Sprint Unlimited Plus is the middle-tier postpaid plan from Sprint. It’s $70 per month and includes 50GB of priority data, 50GB of hotspot data, and a Hulu and Tidal subscription.

Again, compared with Verizon, AT&T, and T-Mobile’s plans, which are $80, $75, and $70 respectively, Sprint stacks up well. It matches all the plans with 50GB of priority data, and it over doubles the competition’s available hotspot data. Sprint includes 50GB of hotspot data instead of just 15GB on Verizon’s plan, 15GB on AT&T’s plan, and a measly 3GB on T-Mobile’s plan.

Factor in 5G access, Hulu and Tidal subscriptions, and the international data  roaming, and Sprint’s plan is actually a pretty great deal.

Sprint Unlimited Premium is their top-tier unlimited plan. Like all Sprint postpaid plans, it includes 50GB of priority data. Where sets Sprint Unlimited Premium apart is the included hotspot data and perks. It comes with 100GB of hotspot data, a Hulu subscription, a Tidal subscription /and/ an Amazon Prime membership for a total of $80 per month.

Verizon, AT&T, and T-Mobile offer expensive, top-tier unlimited plans too. They cost $90, $85, and $85 per month respectively, making Sprint’s option the most affordable at $80. Verizon and AT&T offer more priority data then Sprint (75GB on Verizon and 100GB on AT&T), but Sprint matches T-Mobile with 50GB of priority data.

As with the mid-tier plans, Sprint shines with their high hotspot data allotment. Sprint offers 100GB of hotspot data, while Verizon and AT&T are both limited to 30GB, and T-Mobile only offers 20GB.

The added value of the Hulu, Tidal, and Amazon Prime memberships make Sprint, which is already the cheapest plan of the bunch, an even better deal.

Sprint has 3 easy, hidden discounts that make their plans even more affordable

When I signed up for Sprint, I was surprised to discover three discounts applied to my bill that allowed me to get Sprint’s $70 Unlimited Plus Plan (which is $75 without autopay) for just $62.50 per month. The best part is these are discounts almost anyone can get.

Here are the Sprint discounts:

The first discount was for simply bringing my own device to the Sprint network. By purchasing my iPhone 11 unlocked directly from Apple, Sprint knocked off $10 per month on my bill.

The second discount was for enabling autopay. That’s another easy $5 per month in savings.

And the third discount was the Sprint Works discount, which you get if you are activating a business line with Sprint.

These discounts combine for $20 off your bill, which solidifies Sprint as offering the cheapest postpaid unlimited plans of the big four carriers.

Sprint supports the features you love

My experience using the Sprint network was generally positive. In my area, just outside of Boston, I had generally good coverage. The data speeds weren’t as fast as on the other networks, averaging around 5-10Mbps down and 2-5Mbps up, but everything overall worked well. In some locations I even would hit data speeds in the 50Mbps range.

Sprint supports the features you love too, including VoLTE, WiFi calling, MMS, visual voicemail, and of course the personal hotspot.

My Sprint experience was positive, but beware of the scams

When I went to sign up with Sprint at my local Sprint store, I had a great experience. The representatives I worked with were friendly, and they even hooked me up with the Sprint Works discount because I was activating a business line for my YouTube channel. I was setup, activated, and up and running on the Sprint network in no-time. And I’m confident many people have had similarly positive experiences signing up for Sprint.

What happened was the man went in to upgrade his phone and was quoted $200 for the upgrade. He was then offered free accessories to go with his new phone, including a case, screen protector, and wireless charger. Later, he found out the purchase was charged as two transactions: one for $90, which was the phone deposit and upgrade fee, and second transaction for $110. This second transaction was for a $35 case, $25 screen protector, and $50 wireless charger. The gentleman was outraged! He had been over quoted for upgrading his phone and fraudulently charged for accessories he did not agree to purchase.

It turns out the store was a third party Sprint store, because Sprint is a franchise, and unfortunately this practice is fairly normal because these third party stores make revenue off of their accessory sales. Any method to sell more accessories, even if fraudulently, is extra revenue for the store.

With official Sprint polo shirts and Sprint branding, it is almost impossible to tell these third party stores apart from the corporate locations too. Poor experiences like these can tarnish Sprint’s brand and reputation.

Thankfully it is relatively easy to avoid these kinds of scams, and the gentleman was kind enough to make a flyer which included the following tips to stay safe:

Experiences with any carrier or brand can be hit or miss. I had a positive experience, and I think smiling and being friendly to Sprint representatives can go a long way. If you choose to sign up, hopefully you have a positive experience too, and definitely keep the gentleman’s tips in mind to avoid any potential scams.

Conclusion: Is Sprint Worth It?

If you choose to sign up for Sprint, you’re getting a great value, excellent perks, and awesome international features. You’re just not getting the best domestic coverage.

At least, not yet. When the Sprint and T-Mobile merger is finalized and Sprint customers gain access to the T-Mobile network, then it will be a different story. But until then, whether or not Sprint is worth it for you ultimately comes down to if you get good Sprint coverage.

So how do you tell if you get good Sprint coverage? I recommend you check out a site like RootMetrics or Ookla’s 2019 Mobile Network Performance report.

You can also sign up for an affordable carrier like Tello. Tello uses the Sprint network for coverage, and their plans are just $7 for 1GB and $11 for 2GB. You can sign up for a plan and test out Sprint’s network performance, data speeds, and coverage in your area. Then you could either keep your Tello plan, because honestly Tello offers the most affordable plans on the Sprint network right now, or you could upgrade to one of Sprint’s unlimited plans.

If you get the coverage, Sprint is undoubtedly an excellent value, and they will become an even better deal when they merge with T-Mobile.

You can compare all of the best Sprint plans here.