Customers who remain on the 2GB plan will see their bill double to $30 per month
Written by: 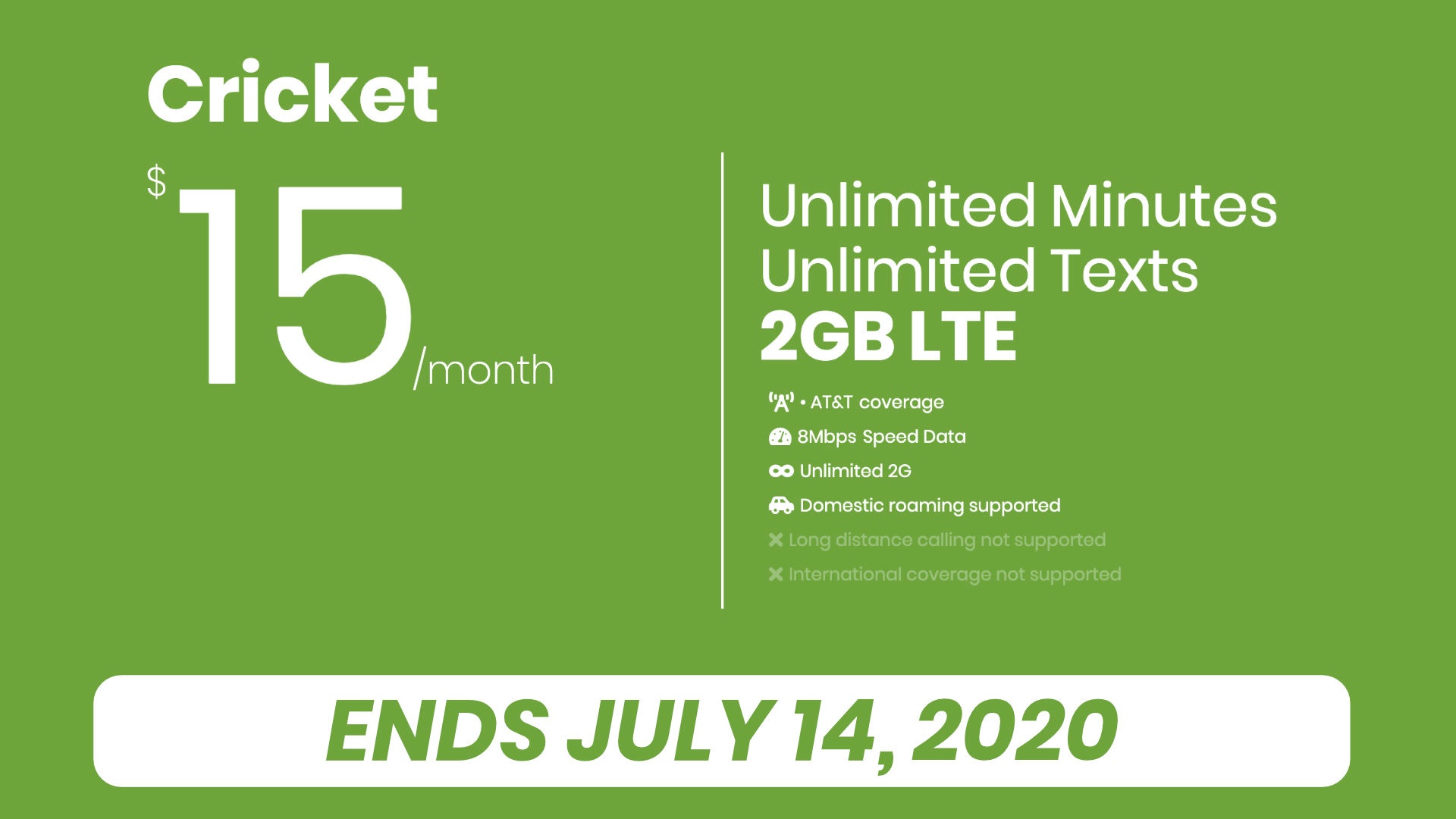 On March 27th, Cricket Wireless announced a new $15 plan for both new and existing customers. The plan was in response to T-Mobile's new $15 Connect plan, which offered consumers unlimited talk & text with 2GB of LTE data for $15 per month.

Cricket's plan matched T-Mobile's. It offered the same 2GB of LTE data for $15. However, Cricket's plan had some nice benefits over T-Mobile's. Cricket included all taxes and fees with the plan, so it was $15 flat per month. Cricket also included unlimited 2G data after the included 2GB of high-speed LTE data. T-Mobile's plan, meanwhile, shut off data usage completely after 2GB.

Cricket's plan was still an excellent value for consumers. You just had to purchase a $10 SIM kit to sign up.

In fact, many people did sign up. They were hoping to get grandfathered into the plan and continue paying $15 for 2GB of data. From Cricket's original announcement, it was unclear how long the plan would be available or if people who signed up would be able to stay on the plan.

Unfortunately, we now know the plan is being discontinued on July 14th, 2020.

We hope the $15/2GB plan has helped you during this difficult time. Starting July 15, 2020, the plan will no longer be available. You can either select a different plan or we will move you to the $30/2GB plan when your bill cycle renews after July 14, 2020.

Cricket has already removed the promotional $15/2GB plan from their website. They are not supporting new activations of the plan at this time.

Any current Cricket customers who still have the plan will have to choose to either switch carriers, switch plans on Cricket, or if they do nothing they will have their monthly bill doubled to $30 per month.

Having Cricket take away the promotional plan and reverting customers to their old $30/2GB plan is disappointing. It makes T-Mobile's Connect plan seem like a much better option, as T-Mobile has no plans to discontinue it.

What are the best alternative plans for Cricket Wireless?

Many Cricket customers will be looking for alternative plans before their prices go up to $30 per month. Here are are a few great options to consider:

Red Pocket's new $19 plan with 3GB of LTE data per month is a great alternative to Cricket's plan. Red Pocket is a prepaid carrier that uses Verizon, AT&T, Sprint, and T-Mobile networks for coverage. You choose which network you want for coverage when you sign up. The $19 3GB plan from Red Pocket is available on the AT&T network, which Red Pocket calls GSMA.

Red Pocket supports standard plan features such as group and picture messaging, VoLTE, and Wi-Fi calling. Mobile hotspot is also available on Android phones, but it isn't supported on iPhones. You get unlimited 2G data after you use your high-speed allotment.

If you'd prefer a cheaper plan, Red Pocket also offers a $15 plan that includes 1GB of LTE data, 1,000 minutes, and unlimited texts. This plan supports the same features, however, it doesn't include unlimited 2G data. Cellular data will be turned off once you reach your 1GB limit.

Boom! Mobile is a prepaid carrier that offers plans on the Verizon, AT&T, and T-Mobile networks. Their $20 5GB plan is available on all three networks. You can choose to sign up on the AT&T network, called Boom Blue, for the same coverage as Cricket Wireless.

Boom! Mobile supports the mobile hotspot, VoLTE, Wi-Fi calling, and visual voicemail for this plan. Boom! Mobile is especially great because they resell AT&T business plans. This means you get the same data priority as postpaid AT&T customers. You can expect faster data speeds with Boom! Mobile than with Cricket Wireless.

The one downside to Boom! Mobile's plan is that it is only available as a 12-month option. The total price is $239.04. While the cost comes out to just $20 per month, it can still be a lot for people to spend upfront.

If the T-Mobile network provides good coverage in your area, then Mint Mobile is another great option to consider. Their $15 plan includes 3GB of LTE data. This is the cell phone plan I'm currently signed up for.

Mint offers their plans in bulk 3-, 6-, or 12-month packages. The $15 for 3GB price point is available for new customers who sign up for 3 months of service. To keep the $15 price point, you will need to renew the plan for the 12-month option after your initial 3 months are up.

Wing's $20 1GB Plan: Wing is a great option because they resell AT&T business plans. Wing supports eSIM. If you have an eSIM compatible phone, you can easily sign up without having to order a physical SIM card.

Pure TalkUSA's $20 1GB Plan: Pure TalkUSA is a great option if you'd prefer to pay monthly for your plan. They recently added support for VoLTE, Wi-Fi calling, hotspot, and FaceTime over cellular for iPhone users.

Of course, you can compare even more of the best cell phone plans on our site: