Mint Mobile’s $30 unlimited plan is one of the best deals out there, but to achieve this price Mint had to make some compromises.
Written by: 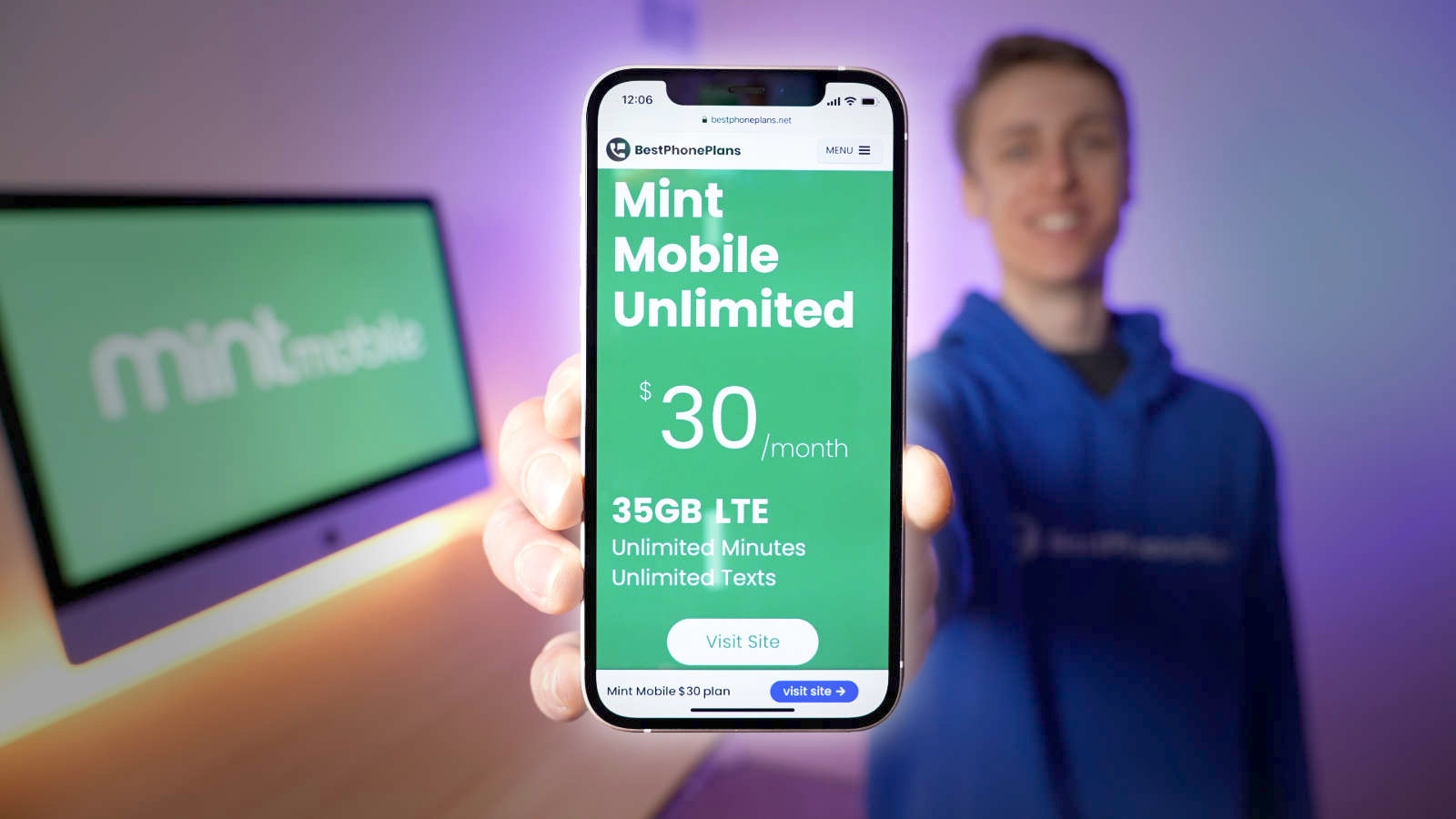 I’ve been using Mint Mobile’s unlimited plan for the past three months.

In this article, I’ll talk about why I think Mint Mobile’s $30 unlimited plan is a great option for a lot of people, but why it isn’t for everyone.

My goal is to help people save money on their cell phone bill. I also designed and built this website, BestPhonePlans, to make it easy to find and compare affordable plans.

With that said, let’s jump into this review.

Let’s start with how Mint Mobile’s unlimited plan is similar to all of Mint’s plans.

It uses the same network for coverage, which is the T-Mobile network, and it supports the same premium features you’re come to expect: Wi-Fi calling, VoLTE, the mobile hotspot, and even 5G access on T-Mobile’s 5G network.

International calling to Canada and Mexico are also now included for free with all Mint Mobile plans, and you make calls to over 160 countries at affordable rates which you can find on Mint Mobile’s website.

An international data roaming add-on is also available to purchase for getting coverage when you travel abroad.

The newest feature is eSIM support.

Mint is slowly rolling out eSIM support out, and it currently only works with compatible iPhones.

Despite the many similarities, it turns out that two features are a little different on the unlimited plan.

On all of Mint Mobile’s other plans, you could use all of your included high-speed data as hotspot data.

With the unlimited plan, you can only use up to 5GB of data as hotspot data.

This means Mint’s 15GB plan for $25 actually includes more hotspot data, as you could use all 12GB as hotspot data.

The second difference is in video streaming quality.

Mint’s previous plans had no limitations whatsoever on streaming quality.

You could stream up to full 4K resolution video if you wanted to.

Sure, it would eat through your data allotment insanely quickly, but the option was there.

This means video streaming speeds are capped at 2Mbps.

It is possible to select the 4K option in the YouTube app and playback 4K video content, but having the 2Mbps speed cap means your 4K video will take a while to load and it’s more likely to buffer during playback.

Thankfully, there is an easy way around this.

In fact, there is an easy way to stream HD video on ALL plans––even those that don’t support it––and that is by using a VPN.

You can test if your plan has a video streaming speed cap by running a speed test on Fast.com.

Fast.com connects directly to Netflix’s servers, so all data coming from fast.com is identified as video content.

VPNs work by hiding what kind of content you are consuming. Your carrier can’t tell the difference between video content, browsing websites, or social media.

By using a VPN you get full, uncapped video streaming speeds, and you can enjoy your shows in up to 4K quality.

If you’re interested in getting a VPN, check out my affiliate partner ExpressVPN.

They are one of the top-rated VPNs for streaming Netflix video content, and they have a 30-day money-back guarantee with no questions asked.

Plus, they are offering my audience an additional 3 months FREE when you sign up for the 12-month plan at ExpressVPN.com/stetson.

The final thing we need to talk about is how much data is included with Mint Mobile’s unlimited plan.

Because, yes, it turns out that this plan is NOT unlimited.

Mint’s plan includes 35GB of high-speed data before your speeds are slowed to 2G speeds.

2G speeds are typically at 128Kbps, which is very slow.

The thing is, for most people, the included 35GB of high-speed data is totally fine.

Cisco’s 2020 annual report shows that only 4% of people use over 50GB per month.

And Reach Mobile did a study where 93% of the 400 people surveyed used less than 20GB of data per month.

Other articles have stated average consumers use between 4GB to 6GB of cellular data per month, and there was even a report in Statista projecting the average usage to be about 8.9GB in 2021.

So the point is this: with 35GB of high-speed data, Mint Mobile can effectively meet the needs of something like 85% to 95% of average consumers, and have the plan feel like an unlimited plan.

Not only that, but $30 per month for Mint’s plan is one of the most affordable deals out there.

It’s under half the cost of T-Mobile Magenta and can save single-line users upwards of $480 per year.

And the cherry on top is that at the end of your first three months, Mint will email you with your average usage.

If your usage falls into one of their lower gig plans, they will actually recommend you switch to the cheaper plan so you save even more money per month.

That’s what I’m talking about!

I’m big on helping people save money on their cell phone bill, so I absolutely love what Mint is doing.

My Thoughts As A Mint Mobile Customer for 2+ Years

I’ve been using Mint Mobile as my personal carrier for over 2 years now, and I think they are doing things right.

They’ve made great improvements to the design and functionality of their mobile app––which I have a full walkthrough of if you’re interested to see how that works—they’ve added Mint Family so you can manage up to 5 lines under one account, they have started to roll out eSIM support, and they even recommend cheaper plans to their customers so instead of them making more money, you can save money.

So if you’re in the market for an affordable cell phone plan or just looking to reduce your cell phone bill, I highly suggest you consider Mint Mobile.

Their unlimited plan starter kit comes pre-loaded with 3 months of service for $90, and at the end of 3 months you have the option to renew the unlimited plan for 3-, 6-, or 12-months, with the 12-month option giving you the best value.

Or you can drop down to one of Mint’s more affordable plans based on your usage in the email they send you.

Mint may not be for everyone, but if you get good T-Mobile coverage and the plans work for you, then you can save a heck of a lot of money per year, and that’s what I’m all about.