Here’s how the tablet and hotspot data plans stack up from the major carriers.
Written by: 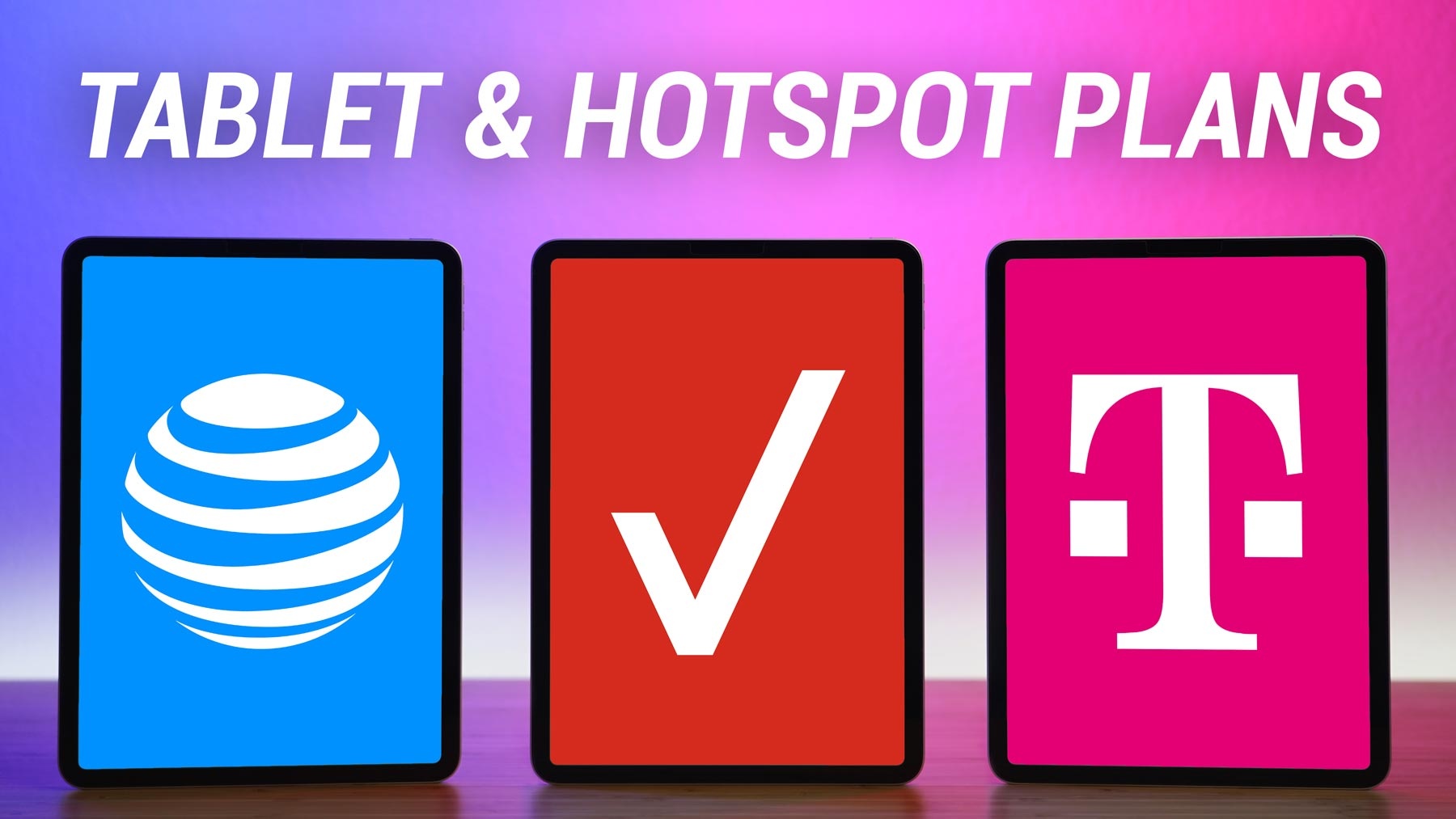 In this article I’m comparing the tablet and hotspot plans available from T-Mobile, Verizon, and AT&T, so you can pick the best plan to meet your needs.

I’ll cover exactly what features are included, what the price differences are, and which plans you should sign up for.

Let’s get into it.

AT&T, Verizon, and T-Mobile offer a few different tablet plans to choose from.

What are the differences?

The two main differences that you should look for are video streaming quality and in how much hotspot data is included.

You get unlimited data with all plans. The big differences are in video streaming quality and hotspot data.

Magenta Plus for tablets upgrades video streaming quality to 1080p and includes 10GB of high-speed hotspot data before capping hotspot speeds at 600Kbps.

For more information on T-Mobile’s tablet plans, such as international features and roaming data, check out my T-Mobile tablet plans explained article.

Verizon’s Unlimited tablet plan is $20 per month and gets you unlimited data with 720p video streaming and 15GB of hotspot data.

Upgrading to the $30 Unlimited Plus plan doubles your hotspot data to 30GB, and it also gives you access to Verizon’s UWB 5G network.

What’s really cool is you get unlimited hotspot data when you’re connected to Verizon Ultra Wideband.

So far, I have only been able to confirm they offer one tablet plan for postpaid subscribers: unlimited data for $20 per month.

This tablet plan isn’t listed on AT&T’s main webpage. I had to find it by doing a separate Google search and somehow discovering a second version of AT&T’s “plans overview” page that happened to list the tablet plan.

When I asked AT&T support representatives about the plan, they initially didn’t seem to know about it. Instead, they directed me to a list of AT&T’s prepaid data plans (which I’ll cover later in this article).

It took a few back and forth chat messages before I got any information about the mysterious $20 tablet plan.

Thankfully, there were members of the Patreon community who knew exactly what I was talking about, and they provided a screenshot of the exact plan.

So here’s what I learned:

AT&T definitely offers a $20 tablet plan, and there is 100% a version that includes unlimited data with deprioritized speeds, 480p video, and no hotspot data.

You can think of this plan as basically AT&T Unlimited Starter for Tablets.

However, when I talked with AT&T customer support, I was told the tablet plan mirrors your postpaid plan. It pulls data from your postpaid data allowance, includes the same video streaming resolution, and it actually gets an extra pool of hotspot data for itself.

So this means there could be a $20 tablet plan for Unlimited Extra customers that gets up to 50GB of priority data, 480p streaming, and an additional 15GB of hotspot data.

There could also be a $20 tablet plan for Unlimited Elite customers that includes up to 100GB of priority data, 4K video streaming, and an additional 30GB of hotspot data.

The availability of these plans may literally change depending on who you talk to, so just confirm the plan you want is available before you sign up.

Honestly, I think Verizon wins when it comes to tablet plans. Their $20 plan includes the most hotspot data at 15GB, they support 720p video streaming (which makes a big noticeable difference when you’re watching video on tablets), and the fact that there is a plan with unlimited hotspot data when you’re connected to ultra wideband 5G is awesome.

T-Mobile’s tablet plans are a good value too, but not quite as good as Verizon’s plan. You get unlimited data, but hotspot speeds are capped at 600Kbps and you are limited to 480p standard definition video streaming. That is, unless you cough up the $30 per month for their Magenta Plus for tablets plan.

T-Mobile also shines because you can get their $5 500MB plan or $10 2GB plan for tablets too. These are excellent low-cost plans to consider for lighter users, and I explain them in the next section.

And then there is AT&T’s tablet plan. AT&T does match the other plans by providing unlimited tablet data for $20 per month, but their plan is clearly the worst option here with no hotspot data and 480p video streaming.

One BIG thing to know about all of the tablet plans I’ve mentioned so far is that the prices are ONLY if you have an active voice line already on your account.

What happens if you don’t have an active voice line and you want to use these plans as standalone tablet plans?

Well, you can do that, but the prices increase by a LOT.

If you’re looking for a standalone tablet plan with no other lines, then I think T-Mobile is the best option. It gives you unlimited data on your tablet, and it comes out to the cheapest price per month.

Each carrier also offers data-only plans that can be used in either a tablet or hotspot device.

These plans are pretty straightforward. You pay for however much data you want, and you can use that data in either a tablet or hotspot.

T-Mobile offers the most flexibility here. They offer six plans to choose from:

The $5 and $10 plans are great for light data users looking for affordable options, and the $50 100GB plan is excellent for heavier users.

Keep in mind that T-Mobile offers two versions of these data-only plans. One verison is postpaid. The postpaid version of these plans includes 200MB of domestic roaming data and gives you high-speed hotspot data if you choose to use the plan in a tablet.

The prepaid version of T-Mobile’s data-only plans does NOT include any roaming data, and if you use the plan in a tablet then the hotspot speeds are capped at 600Kbps.

Verizon’s data-only plans are straight up expensive and not worth it. Your options are:

These data-only plans are available as Verizon Prepaid data plans. Compared to T-Mobile and AT&T, these plans are expensive and not worth it.

The $25 20GB plan does require you to pay up front for 12-months at a time, but it is an outstanding value. The $55 100GB plan is also great for heavier data users.

T-Mobile and AT&T both offer great hotspot plans to choose from.

However, if I were to choose just one winner, I would give the award to AT&T.

Their $25 20GB plan is phenomenal if you are willing to pay annually, and their $55 100GB plan is a great option for people who need more data.

But of course, the best plan for you depends on how much data you need, and more importantly which network provides better coverage in your area.

Thankfully, there are now some great hotspot plans to choose from.