This is the Best Way to Finance iPhone 13

A comprehensive guide to the best iPhone 13 trade-in deals and promotions from Verizon, AT&T, T-Mobile, and Apple so you can get the best price possible.
Written by: 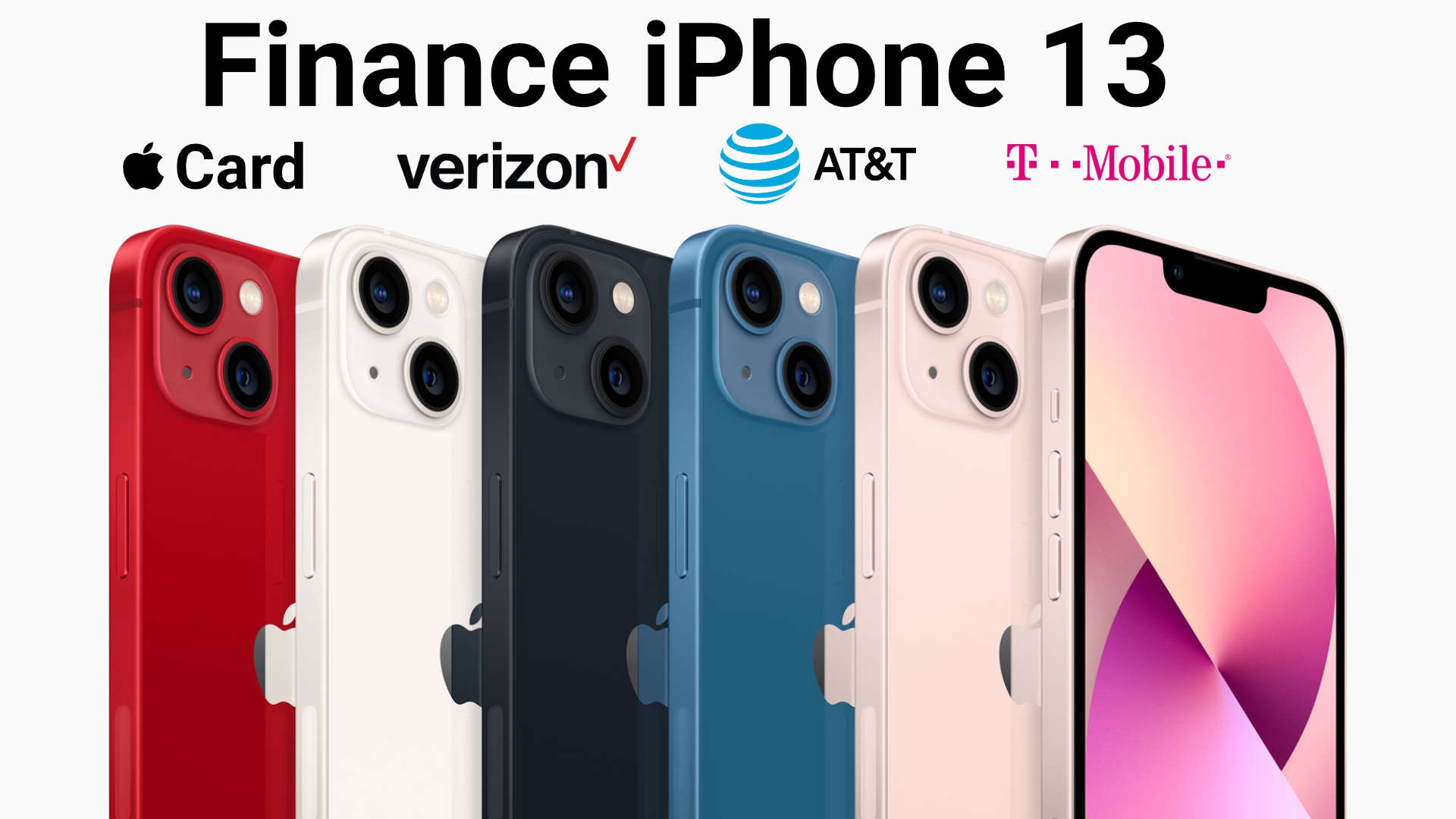 You’re looking to find the best deal possible on iPhone 13, and I’m here to help.

I compared all of the trade-in values and promotions from the major carriers, to find YOU the best deal possible.

I did this for Verizon, AT&T, and T-Mobile for both new customers and existing customers. I even included great financing options for those of you on prepaid plans.

And I think I found one deal that’s better than them all.

This article will literally save you hundreds of dollars on your new iPhone 13, so let’s get into it.

How To Get The Most Cash For Your Old iPhone

When you go to upgrade to iPhone 13, you have four main things you can do with your old phone:

The first three will give you the most money for your old device. Let’s start with the first two, selling it online or trading it in for cash.

Selling Your Old Phone Online or Trading It In For Cash

To find you the best deal on your device, I looked at the current trade-in offers and resale values of the iPhone SE 2020 up to last year’s iPhone 12 Pro Max.

I checked offers from Apple, OCBuyBack, Swappa, Decluttr, and Gazelle.

Decluttr and Gazelle continue to offer you the worst value for your old device. They offer up to 20% LOWER trade-in value than going through Apple directly. So don’t use those.

But the other options, Apple, OCBuyBack, and Swappa, are actually decent.

Apple is probably the most convenient. You can make the trade-in at your local Apple Store or via a mail-in box, and you get the credit applied to the same credit or debit card that you used to make the purchase.

Two downsides to Apple are:

If you shelled out big bucks for a top-tier storage configuration, then you’re losing money here.

Thankfully, OCBuyBack is another great option. They’ll give you about 4% to 13% more for your old iPhone than Apple will, and they’ll also pay more for higher storage models. Plus, you’re getting paid in cash via CashApp or PayPal, so you can use the money anywhere.

If you choose to use the service, OCBuyBack provides you with a prepaid shipping label. You pop your phone in a box and ship it out, and once OCBuyBack verifies it’s in good condition, they’ll send you the money. I’ve used the service twice and had good experiences both times.

If you want the absolute most for your old device, you’ll want to sell it on Swappa, Facebook Marketplace, or eBay. Taking the time to snap a few photos and make a listing will earn you up to an extra 22% more cash for your old device compared to Apple.

But if you really want to maximize the value of your old phone, then you may consider option 3: trading it into a carrier.

For iPhone 13 Mini, AT&T offers the most for your older devices at $350. Then, AT&T and Verizon tie by offering $700 for the iPhone X or newer, which is enough to get the iPhone 13 Mini for free.

And T-Mobile is doing two deals here. The way the deals work is you trade in your iPhone X or newer to Apple and get Apple’s standard trade-in credit. Then, T-Mobile will give you additional account credit depending on what plan you’re on.

This move is clearly to get people to upgrade to Magenta MAX for the extra credit.

Here’s a quick cheat sheet with those prices for all iPhone 13 models:

For the regular iPhone 13, AT&T and T-Mobile keep the same trade-in values while Verizon ups the anti. They up the trade-in value to $800 for an iPhone X or newer, which means you can get a free iPhone 13 from Verizon.

But AT&T turns the tables for the iPhone 13 Pro. They’ll give you a free iPhone thanks to up to $1,000 of trade-in credit with an iPhone XS max or newer. The rest of the deals are the same.

Are Carrier Trade-in Deals Actually Worth It?

But WAIT, are these deals actually worth it, or are they a TRAP?

And T-Mobile’s deal requires their most expensive $85 Magenta MAX plan.

I’ve already seen people on Reddit saying their bill would jump up $68 per month, or $816 per year, if they were to switch from T-Mobile ONE to Magenta MAX to get this deal, which makes it not worth it at all.

But for some people, the deals may still be worth it.

So to help you decide, I did a full cost breakdown of exactly what you’d pay over the 24, 30, or 36-month financing agreements a little bit later in this article.

But before I talk about that, I want to talk about...

There is one secret iPhone 13 deal that no one is talking about, and I think it’s the best one of them all.

You see, with Apple Card monthly financing lets you trade in your phone to Apple, gives you 0% interest on 24 monthly payments, gives you 3% cashback and you get an unlocked iPhone.

An unlocked iPhone means you can use it on any carrier or plan you want, such as more affordable plans that could save you a surprising amount of money.

How much money, exactly?

For this comparison, we’ve got Apple Card Monthly Financing with an Apple Trade-In, Verizon, T-Mobile, and AT&T.

I used an iPhone 11 here as our trade-in device and said we were upgrading to the iPhone 13. I also made the duration 36-months for all plans to better compare them because AT&T’s agreement is over 36 months:

And as you can see, going with Apple Card Financing and a low cost cell phone plan saves you over $1,200 compared to the cheapest postpaid option.

And the cheapest postpaid option was AT&T.Why? Because their plan is $5 cheaper, and $5 per month over 36 months is $180. Despite T-Mobile offering more credit, both AT&T and Verizon ended up being lower-cost options here.

But what if these plans were over a period of just 24-months, which is true for Verizon, T-Mobile, and Apple Card? I calculated that for you, too:

But what about for families? I calculated those costs for you, too:

Check it out. For the same 36-month period, going with Apple Card Financing and prepaid plan saves a family of four $1,000 compared to the cheapest postpaid plan.

But the gaps between the plans shrinks a lot when we look at the plans over a period of 24-months.

In fact, this is the first time where the postpaid plans are cheaper than the prepaid option.

AT&T is the cheapest, but because this option doesn’t actually exist, I’m giving the win to Verizon.

Still, Apple Card Financing with a prepaid cell phone plan is cheaper than Verizon, AT&T, and T-Mobile in 4 out of 5 scenarios.

So, for the truly best deal, you may want to check out affordable cell phone plans from Mint Mobile, Red Pocket, US Mobile, and Visible.

These are great low-cost options for individuals, and I have reviews for them on my channel.

For families, you may want to check out plans from Cricket Wireless, Metro by T-Mobile, and Visible. Their great family discounts bring the cost per line down to around $33 to $25 per month.

How To Get These iPhone 13 Deals

To get Verizon’s trade-in deals, you need to purchase the iPhone 13 either from Verizon or from Apple. Then, you need to trade in your qualifying device, typically within about 14 days.

Once Verizon or Apple receives your device, you should see the trade-in credits applied to your bill after 2 billing cycles.

Verizon applies the credits over a 24-month period.

Verizon also charges a one-time $35 activation fee per line, and you will likely need to pay sales tax on the retail price of iPhone 13. Sales tax varies from state to state, but I estimate it will be about $52 with a 6.5% sales tax rate.

To get AT&t’s trade-in deals, you need to trade in a qualifying device in good condition. This means it turns on and off, there is no battery damage, the front and back aren’t cracked or broken, and it is paid off.

You need to trade in your phone within 30 days at an AT&T store, or by using AT&T’s online website. I recommend going to a physical AT&T store for the best experience.

If you choose to trade in your device using the online portal, you’ll need to enter the code “TRADEOFFER21” to get the extra trade-in credit.

AT&T will apply the promotional credit over 36 months. You should see the credit start to appear on your AT&T bill within 3 billing cycles after AT&T has received your device and verified it is in good condition.

When you get this deal, you can expect to pay a one-time $30 activation fee per line, as well as sales tax on the full retail price of the phone. The sales tax would be about $52 based on a 6.5% tax rate. 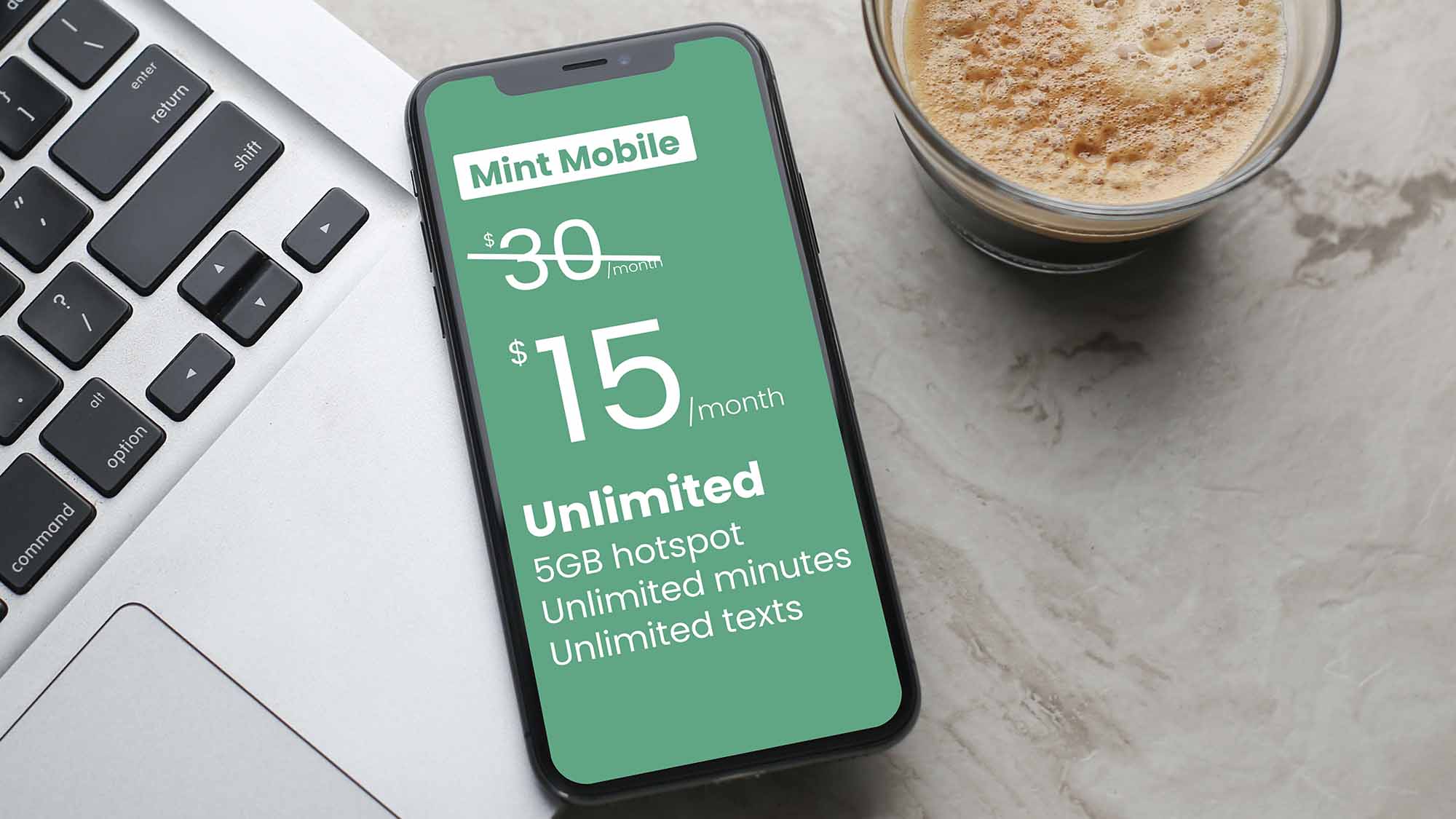 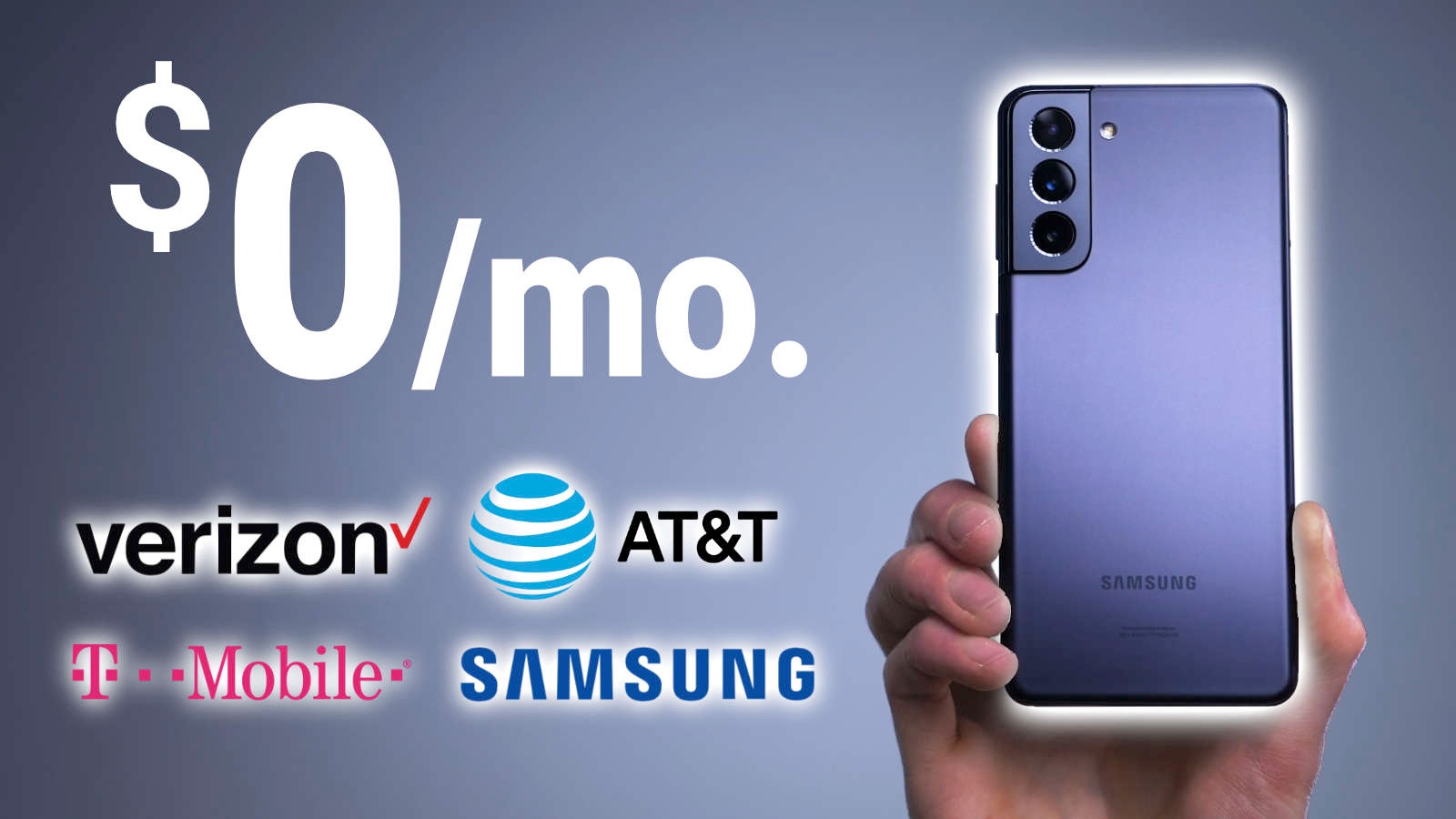 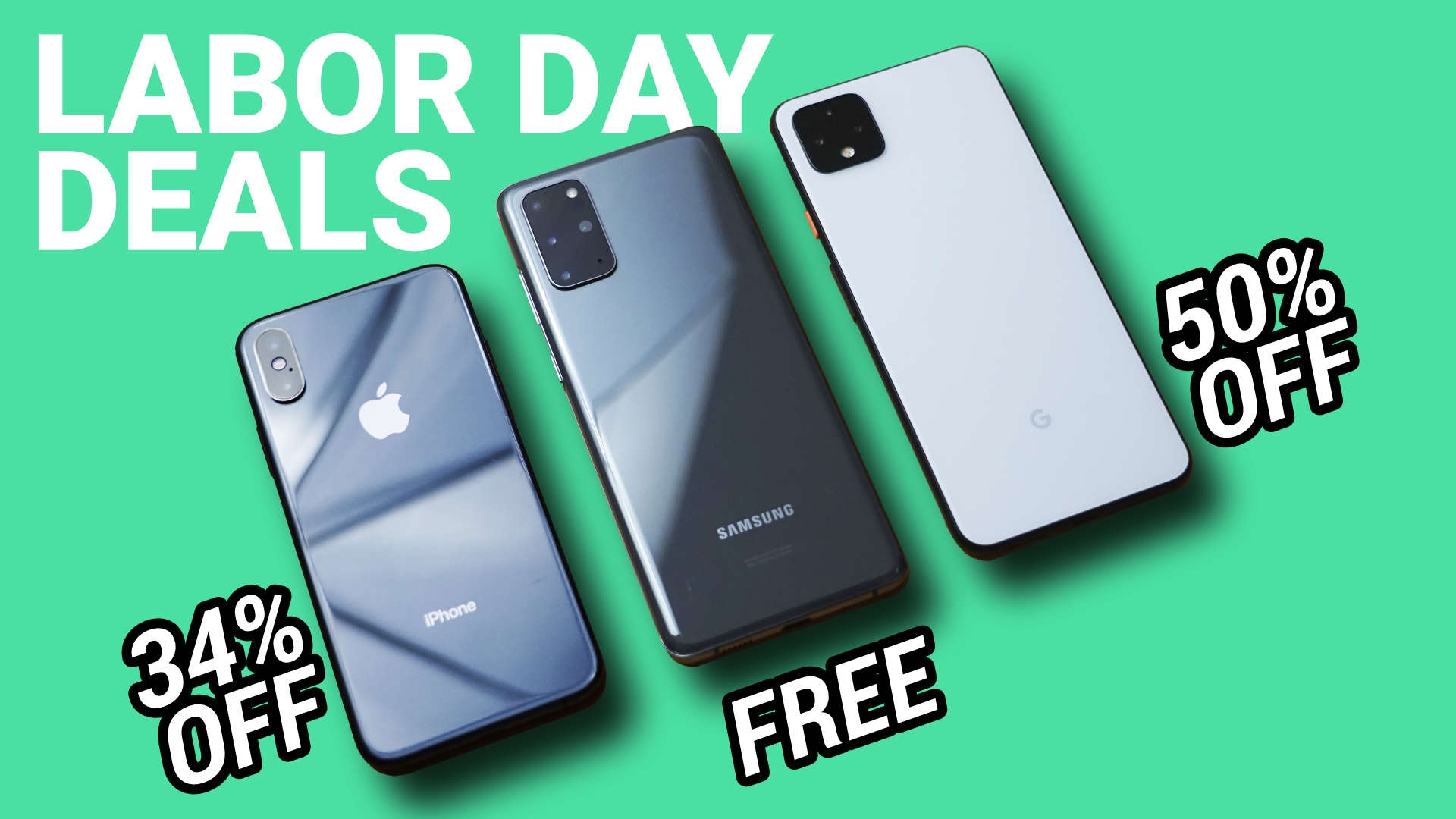 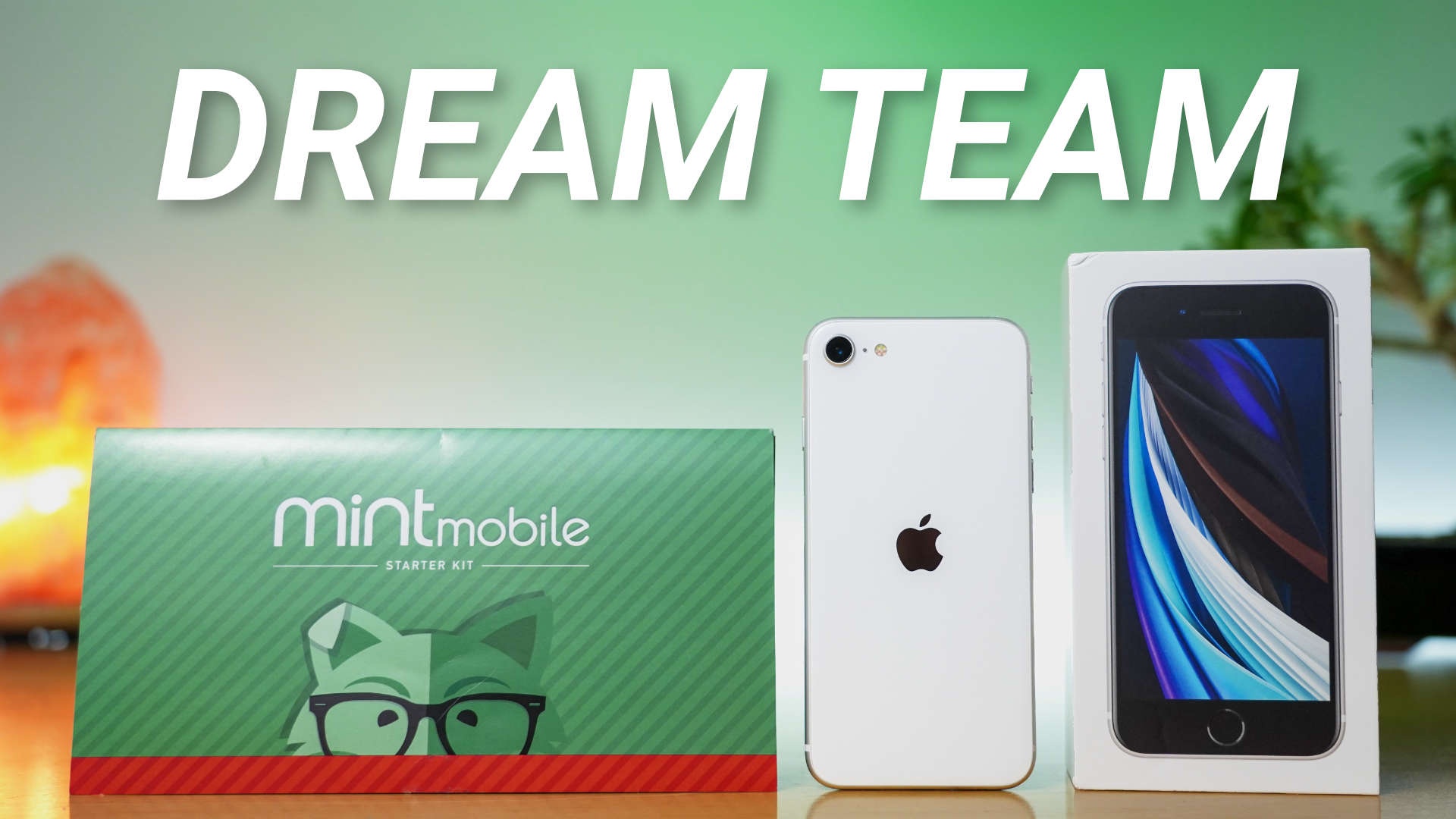 Spend Less, Save More: Mint Mobile and the iPhone SE Offer Consumers A Winning Combination
May 26, 2020 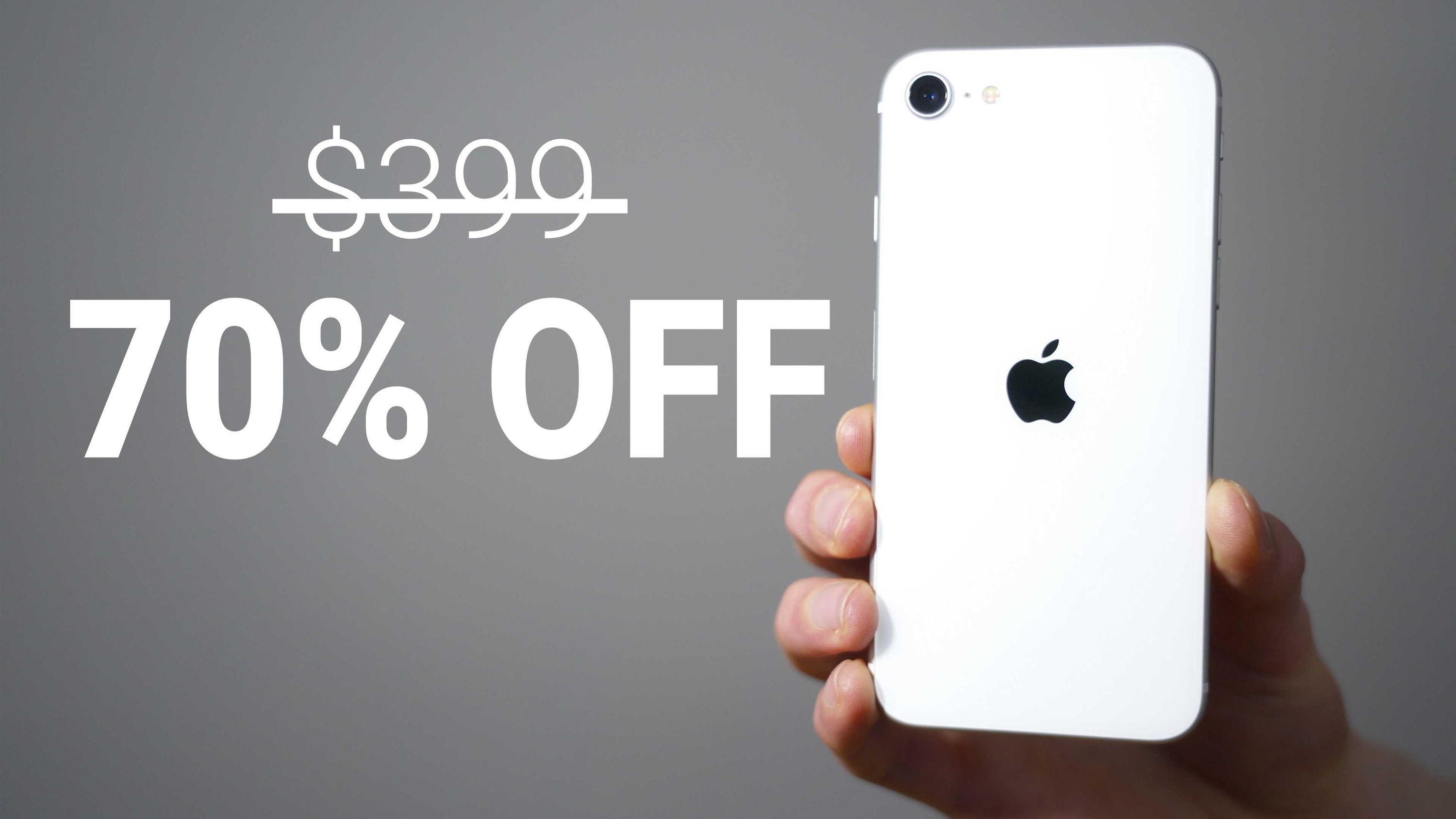 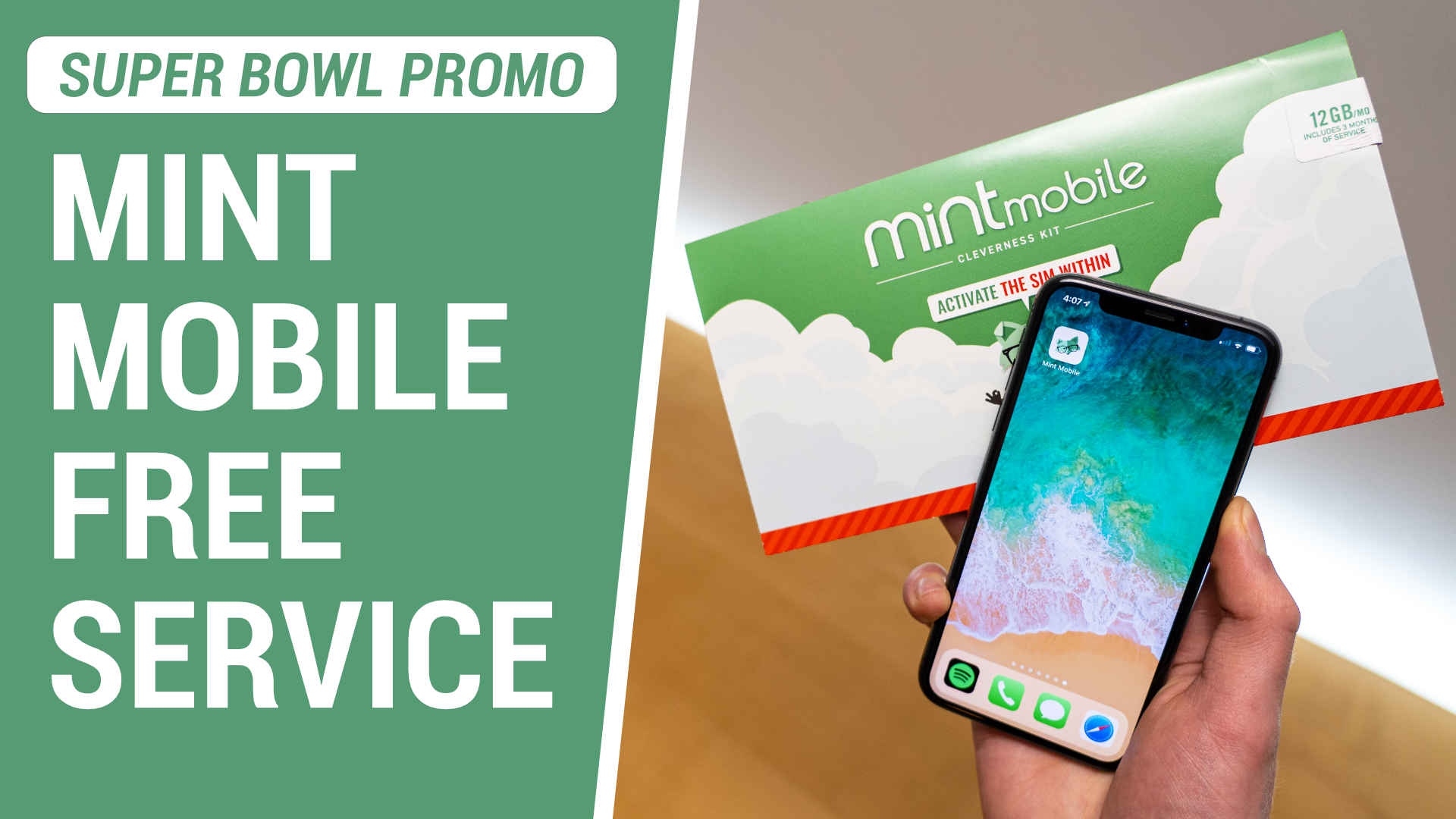 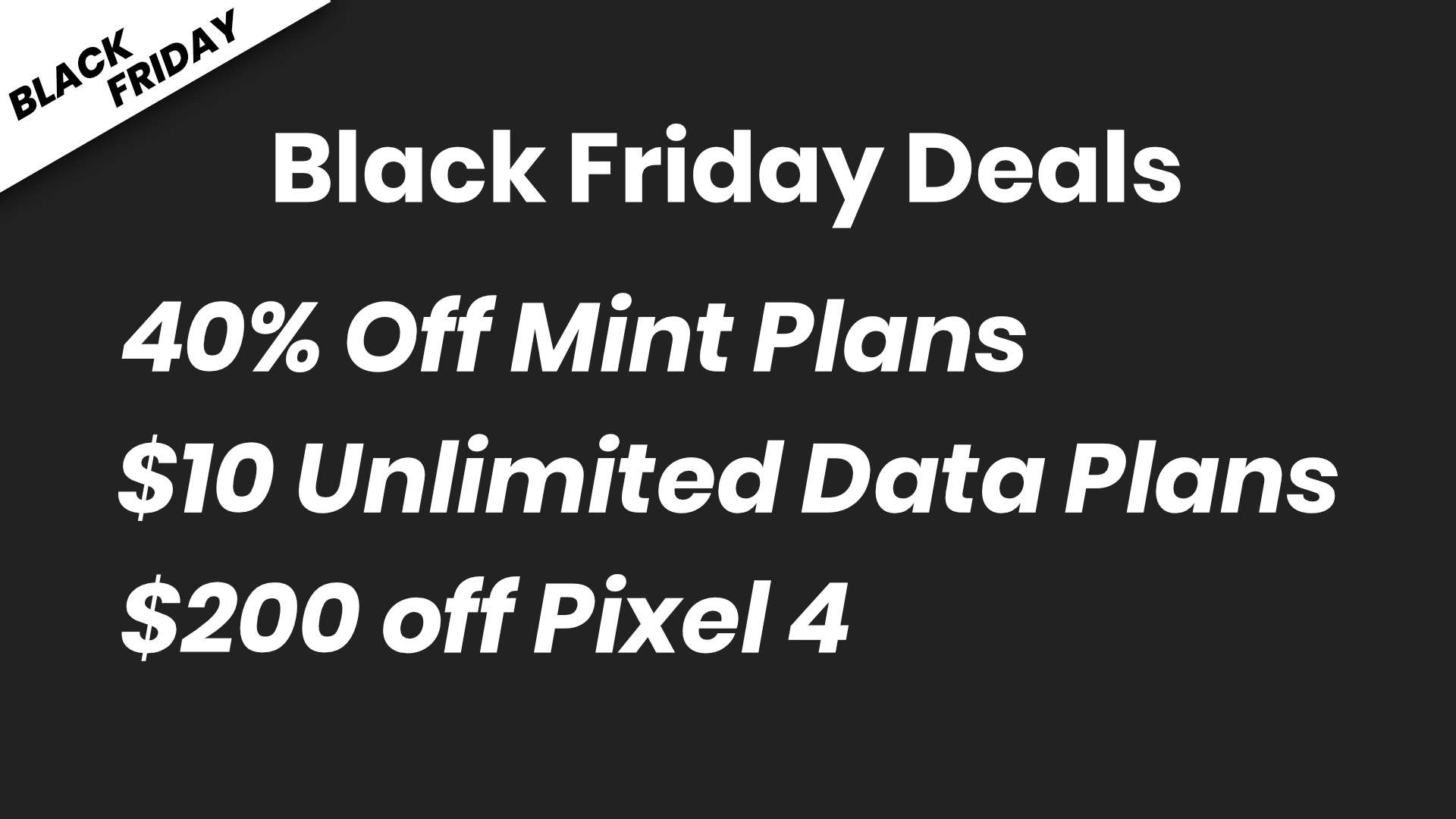 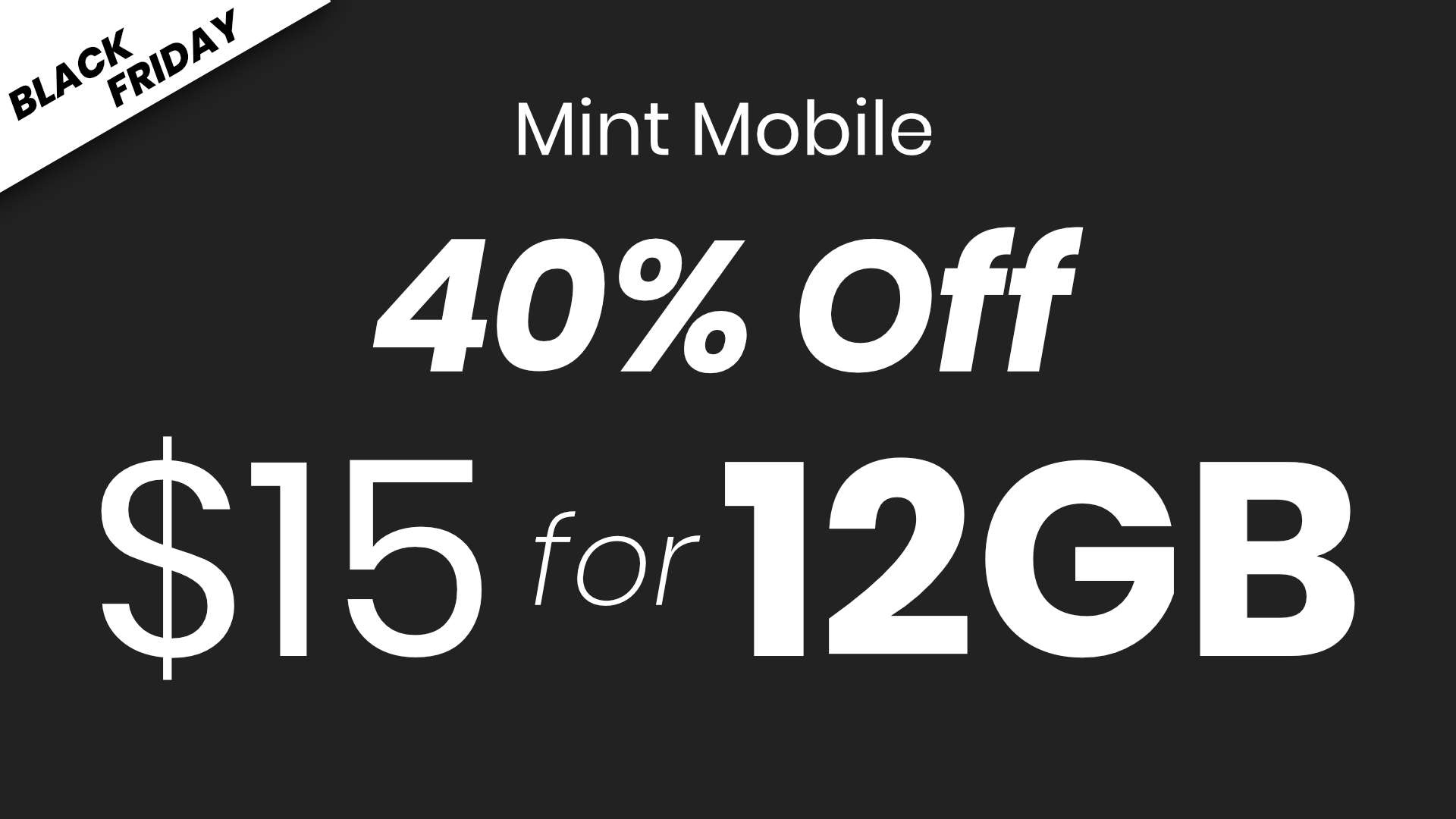