Visible offers truly unlimited data on the Verizon network for as low as $25 per month. But is the low-cost service too good to be true?
Written by: 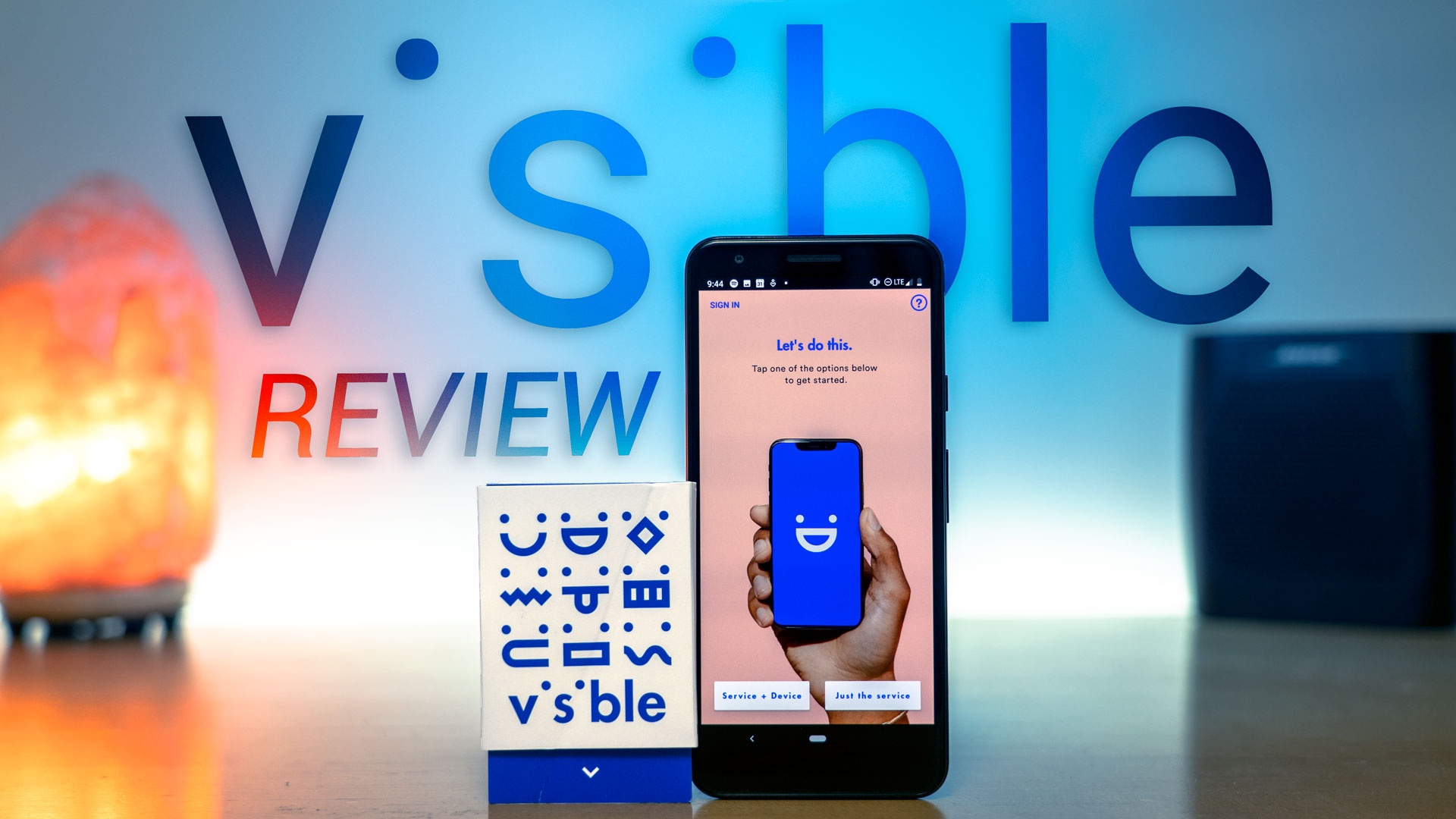 This is my review of Visible, a carrier owned by Verizon offering unlimited data for just $40/month.

Visible used to have a 5Mbps data speed cap, but as of June 26th they have removed it for a limited time. New and existing customers can enjoy full speed LTE data on Verizon’s robust network, and if you sign up now you’re locked in to high speeds for as long as your service is active.

So is Visible worth signing up for? What is the experience like using their network? And how can they offer such an affordable plan?

In this article I’m covering everything you need to know about Visible, and what my experience has been like using their network.

Visible first launched in 2018 as an invite-only carrier exclusively for iPhones. Since then they have opened up the plan to the general public. You no longer need an invite code, and they offer support for a wider selection of phones.

And this app plays a huge part in how Visible is able to be so affordable. They are an online only carrier, which means they save money on expenses associated with physical store locations. They don’t need to pay for heat, electricity, leasing the building space, or on employees who staffing the stores. Being owned by Verizon also means Visible doesn’t have to pay to get access to Verizon’s network. Visible passes on their savings to their customers, which is how they achieve $40/month for unlimited data.

And what’s great is all taxes and fees are included here, so it is $40 flat.

Visible’s $40 plan compares extremely well with the other offerings. US Mobile used to offer the cheapest unlimited data plan at $40, but that plan has data speeds at 1Mbps. Visible can now get over 100x these speeds with their new update, and a comparable plan from US Mobile is $55/month.

Verizon cheapest unlimited plan, from Verizon Prepaid, will run you $65/month. Visible’s $40 plan will save you over $300/year, which makes them an extremely compelling option.

In fact, I’d go so far as to say Visible currently offers the BEST unlimited plan on the Verizon network in terms of price to performance.

So what is the experience like using Visible as your carrier? Visible provided me with two months of free service, and I’ve been testing them out on my Pixel 3a.

I want to provide you with the most helpful information possible, and some people have had very different experiences using Visible than I have. It turns out, achieving $40/month requires a few compromises.

As you would expect from a carrier owned by Verizon, the core features of talk, text, and data all worked fine for me, but they each have their own caveats.

Call quality was as you’d expect, but WiFi calling was only supported on iPhone and not Android. Visual voicemail worked on my Pixel 3a, but I’ve heard other reports of it not working automatically on Android. The solution appears to be putting the SIM card in an iPhone, setting up visual voicemail there, and then popping the SIM card back in your Android phone.

Messaging actually worked great for me. Nothing much to talk about here.

And cellular data. Yes, Visible now offers uncapped, full speed data, but full speed doesn’t always mean highest quality or highest priority. Visible is using what they describe as “optimization technologies to transmit data files in a more efficient manner to allow available network capacity to benefit our members”. So while I and other users have been able to get exceptionally fast uncapped data speeds while running speed tests, it’s possible Visible may be optimizing data speeds depending on the content you’re consuming. (We’ve seen this with other carriers too. Boost Mobile limits video streaming to 480p, music to 500Kbps, and gaming to 2Mbps. I don’t know if this is exactly what Visible is doing, but that’s my hypothesis).

And I'm actually okay with this. I think it reduces network congestion, your content still loads just fine, and aims to provide a better overall experience for everyone.

Now let’s talk about data prioritization. Data prioritization occurs when multiple people are connecting to the same cell tower trying to download or upload data. The cell tower can only transmit a certain amount of data a time, and when the network is congested the tower must decide which connections to prioritize and which ones to slow down. If everyone had the same priority level, then it would be like running into traffic on the highway. Everyone slows down to the same speed. However, carriers are offering prioritized speeds for certain users. This would be like building a special lane on the highway that only certain cars are allowed to travel on, and they can go much faster.

Verizon prioritizes their post-paid users first, then their prepaid users, and then other carriers such as Visible, US Mobile, and Straight Talk. In some locations, such as more rural locations with less network traffic, you’ll never notice the difference. Speeds will remain fast and usable. However, in more densely populated areas such as major cities, it’s possible you may notice slower speeds during times of network congestion.

In fact, I was able to observe this myself while running a few data speed tests (check this out in the video at 5:47). Here you can see Verizon’s post-paid Above Unlimited Plan on the left and Visible on the right. I connected them to the same server and ran speed tests. When I ran the speed tests individually, both phones got around the same speeds. However, when I ran the tests at the same time Verizon’s plan maintained it’s speeds while Visible had a noticeable drop in performance. I will say that Visible’s 10Mbps speeds are still twice as fast as their previously capped 5Mbps speeds, and these are still plenty fast for getting everything you need done on your phone. The deprioritization can cause a larger variation in performance though, and some users are advocating for a 5Mbps speed cap with high priority.

Again, network performance is extremely dependent on your location and the time of day, but this is definitely something to be mindful of when considering Visible.

What is AWESOME about Visible’s data is you will never be slowed down based on how much data you use. Plus they support the personal hotspot feature, and you get full speed unlimited LTE data on the hotspot as well. That’s amazing.

The last thing I want to talk about is Visible’s activation process. When I signed up for a new number my activation went fairly smoothly.

The one glitch I had was when entering my address, but I was able to fix this by restarting the app.

Other users have shared their stories online, and it’s an absolute mixed bag. For some people, everything goes beautifully, and for others it is a disaster. One user on Reddit says, “I've activated 5 lines since launch, and 2/5 were disasters, the others were perfect. There's either a great experience with Visible, or a total failure, no in between.”

Basically, many of the issues people are experiencing appear to be associated with porting their number over or attempting to purchase a phone directly from Visible.

My advice to have the smoothest activation possible is to verify your account number and PIN with your current carrier before porting over, and to purchase your phone unlocked directly from the manufacturer. Swappa is also a great site to buy gently used unlocked phones at 15%-50% off their original prices.

I think what happened is Visible’s uncapped data speeds drove a surge of people to sign up, and their systems were not ready for that kind of volume of traffic. Visible is a young carrier, and they are going to have a few growing pains. They even advise on their website there may be some hiccups.

Visible is using new platforms and new technology, which at times may not be perfect, but it also has the huge potential to adapt quickly and remain agile. I love to see Visible Employees active on the Reddit communities, engaging in comments, and recognizing issues. This is not something you would see from Verizon. They also provide updates on what they are working on, when features will be supported on which phones, and so much more. I think this is exceptionally cool to see.

Ultimately, I think the best approach to using Visible may be to use it with Google Voice. Google Voice is a free online service that gives you a real phone number and allows you to make calls and send texts over WiFi or cellular data. You can also port your current phone number to Google Voice, which acts as a safe-haven. No matter which carrier or plan you sign up for, your number will always be safe. You can then sign up for a new number with Visible, have a smooth activation process, and enjoy unlimited Verizon LTE data.

Visible isn’t for everyone, but they certainly provide one heck of a good deal on wireless and one of the best unlimited plans on the Verizon network. I look forward to seeing them grow and improve in the future.

Visible has a $20 referral program. If you choose to sign up, use code wFT2c to get $20 of account credit.

Share this article with one person curious about for Visible. Comment on the YouTube video below if you have questions. And a special thank you to Visible for sending me free two months of service to try their network! 🙏🏻🙌🏻