Are Google Fi's New Unlimited Plans Worth It?

Google Fi’s new plans give you more data at cheaper prices. How do they stack up against the competition?
Written by: 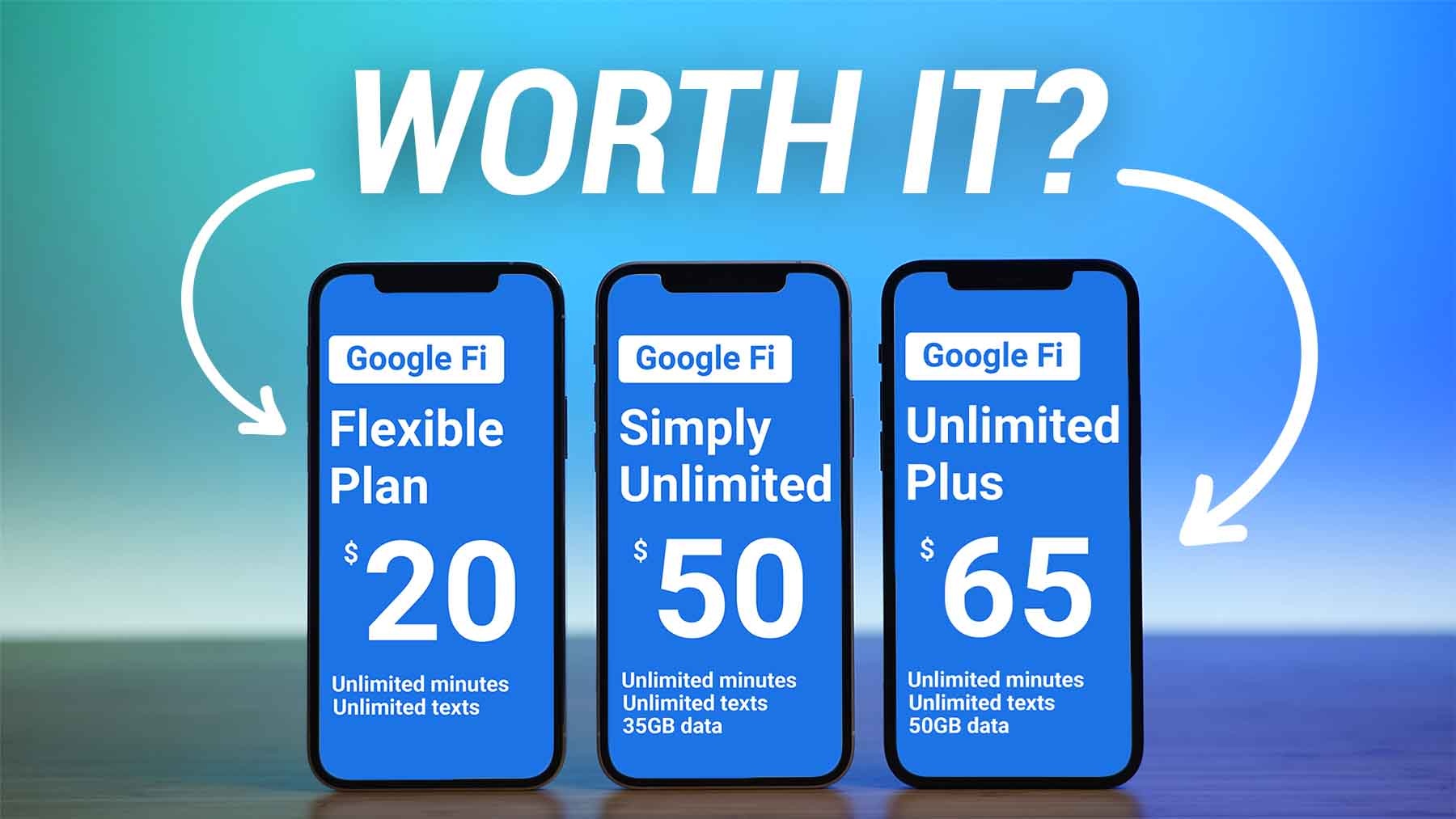 Google Fi’s new plans give you more data at cheaper prices. How do they stack up against the competition?

Google Fi just launched new plans with more data at cheaper prices, but are these new plans worth it? How do they stack up to the competition, and should you sign up?

In this article, we’ll be answering these questions, so make sure you stay to the end of the video to know if Google Fi is worth signing up for.

What is Google Fi?

Google Fi is a cell phone carrier run by Google.

It uses the T-Mobile and U.S. Cellular networks to provide coverage, and it offers 3 plans to choose from:

What Changed with the New Plans?

The Flexible plan didn’t change at all. It’s still $20 per month for unlimited talk and text, and $10 per gigabyte of usage.

But the Simply Unlimited and Unlimited Plus plans? Those saw some great new changes.

International calls were available to other countries, but you had to pay per minute.

The new Simply Unlimited plan drops the price down to just $50 per month, increases the data amount to 35GB of data, adds 5GB of hotspot data, and adds free calling while in Canada and Mexico as well.

The rest of the features are the same as before.

Next we have the Unlimited Plus plan. The old plan was $70 per month, came with 22GB of data, 480p video streaming, and supported the mobile hotspot.

Other countries were available at affordable pay-per-minute rates, too.

100GB of Google One storage and the ability to add data-only SIMs to your plan were also included as perks.

The new plan drops the price to $65 per month, increases the data to 50GB, continues allowing hotspot data, added free calling while in Canada and Mexico, and kept the rest of the great features the same.

Again, overall great improvements from Google Fi on this new plan. And all existing customers were upgraded to these new plans for free.

The real story with Google Fi’s new plans is the new multi-line discount.

Before, pricing for four lines was $30/line on Simply Unlimited and $45/line on Unlimited Plus.

Now, the prices have dropped to just $20/line and $40/line, which makes the plans an even better value for families.

Here’s the full pricing breakdown for 1 to 4 lines:

Are Google Fi’s New Plans Worth It?

But the question remains, are these new plans with these new prices actually worth it?

Is Google Fi Flexible Worth It?

For the $20 Flexible plan, the answer is simple: No.

You can get the exact same plan from Ting, but at half the price. $10 for unlimited talk and text, and $5 per GB.

Granted, the big perk for Google Fi is that the plan works while traveling abroad, and it keeps the same $10 per GB rate which is highly convenient for frequent travelers.

That said, it’s becoming easier and easier to pick up an international eSIM plan from companies like Airalo, US Mobile, and Simtex, and rates are oftentimes better than what you get with Google Fi.

US Mobile is just $5 for 1GB for a trip to the U.K., and Airalo has an option that’s $10 for 3GB. Both of those plans are a way better deal for international data.

Is Google Fi Simply Unlimited Worth It?

For the Simply Unlimited plan, my answer is simply “no.”

You can get almost the exact same plan from Mint Mobile for just $30 per month, which saves you a cool $240 per year.

And the same $50 gets you a truly unlimited data plan from Metro by T-Mobile with 5GB of high-speed hotspot data.

Or, if you wanted the best deal out there, you could do Walmart Family Mobile’s plan. This plan includes truly unlimited data, 720p video streaming, 30GB of hotspot data, and unlimited calling to Canada and Mexico for just $50 bucks a month. That is suuuuch a good deal!

BUT, there is one surprising scenario where the Unlimited Plus plan does make sense. I’ll cover that at the end of the article, so make sure to stick around.

Is Google Fi Unlimited Plus Worth It?

Finally, for the Unlimited Plus plan, there’s a little bit more to the story.

For domestic use, you can technically get a better plan from T-Mobile Prepaid. Heck, even the Walmart Family Mobile plan remains a great value here.

But, there is one key advantage Google Fi Unlimited Plus has over the other plans: included international data roaming in over 200 destinations.

The only similar plan is T-Mobile Magenta. This also includes free international roaming, but it does limit international speeds to just 128Kbps.

Magenta is also $5 more than Unlimited Plus, but after Google’s 10 to 20% estimated taxes and fees, Google Fi will end up being more expensive.

Okay, remember how I said there was one surprising scenario where the Simply Unlimited plan makes sense?

This is the one scenario Simply Unlimited makes sense: for families!

With the new family discount, Simply Unlimited comes out to just $20 per line.

As for the Unlimited Plus plan? It’s still a tough call.

It’s a better deal at just $40 per line, but you can again get truly unlimited data for less. Take Metro’s $35 plan with 15GB of hotspot data, for example.

Even Magenta MAX is about the same after you add taxes and fees to Google Fi, and you get some pretty nice perks with Magenta MAX.

So what’s my take here?

Google Fi is in a unique position, and I can easily see how getting a plan with great international features would make sense for some people.

That said, I think a majority of you will prefer getting a cheaper plan with more data, and then grabbing a low-cost international eSIM plan when you do travel abroad.

So bottom line: is Google Fi worth it?

For families, the only option that’s worth it is the Simply Unlimited plan. It really is a great value at $20 per line. The other plans aren’t worth it though.

Unless maybe you need the international roaming features in Unlimited Plus?

Share this article with a friend if you found it helpful!