We may earn commission if you choose to make a purchase using our links. Learn more.

Metro by T-Mobile is a prepaid carrier with affordable cell phone plans, but it turns out only one plan is worth it. 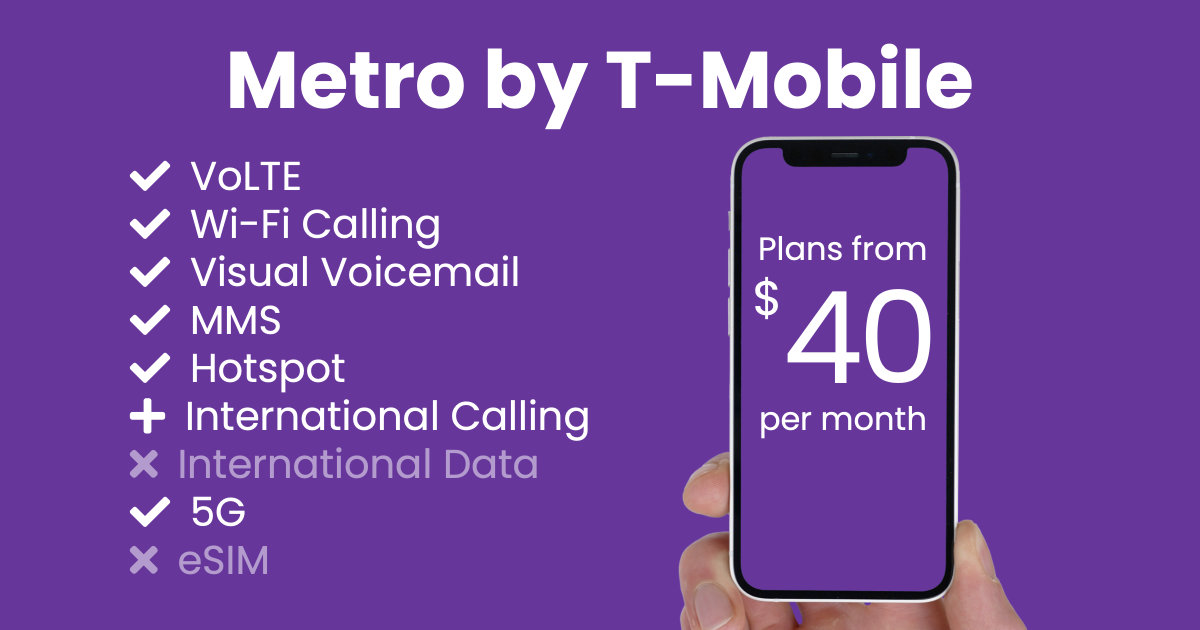 Metro by T-Mobile is a T-Mobile owned prepaid service. In this full review of their plans and perks, I’ll cover everything you need to know about their coverage, data prioritization, plan add-ons, and account management. I’ll also compare Metro to competing MVNOs so you can get the best deal for your needs.

Metro by T-Mobile offers four plans to choose from:

The $30 plan includes unlimited talk and text with 2GB of high speed data. After using 2GB, unlimited data works at 2G speeds (128Kbps). Hotspot data is not supported on this plan.

The $40 plan includes unlimited talk, text, and 10GB of high-speed data before data is slowed to 2G speeds. Metro also includes Music Unlimited as a perk on the $40 plan. This lets you stream unlimited music from your favorite services like Spotify, Apple Music, iHeartRadio and more, without counting the data usage against your high-speed allotment. Like the 2GB plan, this 10GB plan does not allow you to use the mobile hotspot feature.

The next plan is the $50 unlimited plan. This includes unlimited talk, text, and unlimited data. Metro also adds support for the mobile hotspot and includes 5GB of hotspot data. Hotspot data is shut off after the 5GB allotment.

Another interesting perk Metro includes is 100GB of Google One storage. This storage can be used for any Google service like Gmail, Google Drive, Google Photos, and for backing up your phone. Normally Google charges $2 per month or $20 per year for 100GB of storage, so it’s a nice perk.

Unfortunately, the link in my Metro account to add the 100GB of Google One storage brought me to a broken URL filled with ads. To add the storage you need to reach out to customer support, or use the Metro app on an Android phone, but I never got around to this in the short time I used this plan.

Finally we have the $60 unlimited plan. This plan is the same as the $50 plan, but increases the hotspot data to 15GB, and adds membership to Amazon Prime. Considering Amazon Prime is $120 per year for the annual plan, that is $10 a month, which is exactly the difference in cost between the two top plans.

So the only real difference between the $50 and $60 plans are that the $60 plan includes 10GB more of hotspot data. And, unless you need the extra hotspot data, I would recommend using the $50 plan and get an Amazon Prime membership separately. That way the two services are not tied together, so you won’t lose your Prime membership if you cancel your Metro service or switch providers.

Of course, all of Metro’s plans include excellent feature support. You’ll get support for VoLTE, Wi-Fi calling, visual voicemail, 5G access on T-Mobile’s 5G network, domestic roaming data, and mobile hotspot (on the plans that support it). The 5G support includes access to T-Mobile’s Ultra Capacity 5G network which gives blazing-fast speeds where deployed, as T-Mobile gives this access to all MVNOs that use their network.

Data on Metro will be deprioritized compared to T-Mobile’s postpaid customers, but Metro does include domestic roaming. Domestic roaming means you can get calls, texts, and data on partner networks in certain areas where T-Mobile’s network doesn’t have coverage. However, the exact amount of roaming data hasn’t been confirmed, but is likely around 100MB similar to T-Mobile Prepaid.

Interestingly, the only option for international data roaming is in Canada with the Canada unlimited add-on at $5 per month. Metro previously offered a $10 World Calling add-on that included 200MB of roaming data in 18 countries, but customer support says that the add-on was discontinued over 2 years ago. They also used to have a Mexico unlimited add-on, but that is no longer an option on their website.

So if you need coverage when traveling abroad, you’ll need a different solution.

Besides the lack of international data roaming, there are two big cons with Metro’s service:

Speaking of charges, Metro charges a one-time $20 activation fee and $10 SIM card fee when you first sign up.  Once you’re activated though, Metro’s billing is simple and straightforward. Their prices include all taxes and fees, so what you see is what you pay, and I absolutely love that.

Metro also makes it easy to pay via their mobile application, online, or even through an automated system over the phone. Metro also offers a one-time billing extension where they will restore your services and give you 72 hours, or 3 extra days, to pay your bill.

Metro by T-Mobile allows you to easily manage your account and preferences through the myMetro application, which is available for both iOS and Android.

You can make a payment, add lines to your account, manage your plan, purchase add-ons, get support, and more. Check out our video tutorial below to see what the app looks like and how to navigate it:

Comparing Metro to Other MVNOs

When we compare Metro’s plans to the rest of the MVNO industry, we find that Metro plans may not be as great as originally thought.

Metro vs Mint Mobile and US Mobile

For the $30 and $40 plans, you can find cheaper plans with more data from Mint Mobile and US Mobile. You can get the same 10GB of data as Metro’s $40 plan for just $20 per month on Mint Mobile or US Mobile. That’s half the price for the same service. Mint also supports many of the same features as Metro.

If you want more data, you could check out the $30 plans from Mint and US Mobile, which include 35GB and 30GB of data respectively. This is plenty of data for average consumers at a cheaper price. Even T-Mobile’s own Prepaid brand offers 2.5GB of data for just $15 bucks, half the price of Metro’s plan.

Speaking of T-Mobile prepaid, $50 per month gets you unlimited data on T-Mobile Prepaid as well, and that plan has the advantage of higher-priority data. But Tmobile Prepaid’s $50 plan has hotspot data at 600Kbps speeds instead of 5GB high-speed hotspot like Metro’s $50 plan.

And for single-line users, these exact things ring true for the $60 unlimited plans as well. I personally would choose the $60 T-Mobile prepaid plan over the $60 Metro plan every time.

But I did say one of Metro’s plans was worth it. And it turns out that the $60 unlimited plan is worth it, but only for multi-line accounts.

With four lines, the price drops to just $30 per month flat. Taxes and fees, 100GB of Google One storage, and that Amazon Prime membership included. I think THAT is worth it.

It’s somehow cheaper than Metro’s $50 plan with 4 lines thanks to a promotion they are running, and it’s way cheaper than Magenta or Magenta MAX.

So would I recommend signing up for Metro by T-Mobile? Well, if you fall into that category of having four lines and you all need unlimited data, then I think Metro’s $60 plan is worth it. It has truly unlimited data on T-Mobile, has nice perks, and provides a good overall experience.

But for anyone else, I would look elsewhere. People looking for budget plans can find way better deals from Mint Mobile and US Mobile, and people looking for single-line unlimited plans can get a better experience by going with T-Mobile prepaid directly.